Trump, Democrats in frenzied final push ahead of US elections 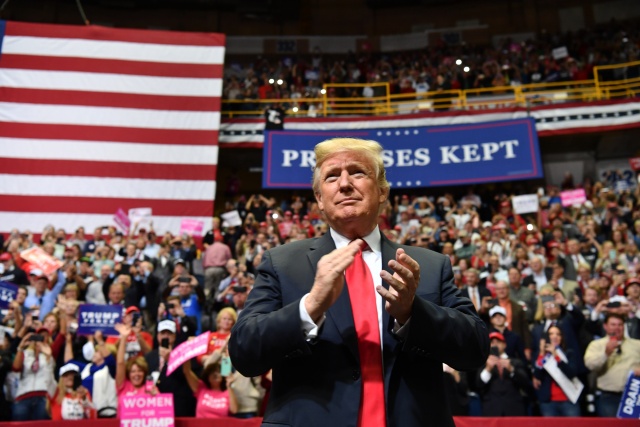 (AFP) - Donald Trump, his Republicans and their Democratic rivals steeled themselves for a final frenzied day of campaigning Monday on the eve of contentious US midterm elections, when voters render their verdict on the president's first two years in office.

Trump has seized on the nativist us-versus-them message that resonated with his base during the fiery 2016 campaign as he races across the country to secure votes, using inflammatory language as he paints a country under threat from hordes of illegal immigrants, rampant crime and far-left Democrats.

"They want to impose socialism on our country. And they want to erase America's borders," Trump told a raucous rally in Chattanooga, Tennessee late Sunday.

As Republicans aim to protect their majorities in the US House and Senate, Democrats hope their strong grassroots enthusiasm can help them win back at least partial control of Congress and thus thwart Trump's agenda.

Fierce political battles were raging in races across the nation.

In Florida and Georgia, Democrats are aiming to become the states' first African American governors.

Monday will be a barnstormer for Trump, who will make stops in Ohio and Indiana before a final campaign pitch in Missouri, where he is trying to knock Democratic Senator Claire McCaskill out of office.

Trump was on a hectic schedule of campaign appearances for Republican candidates Sunday, while former president Barack Obama made a last-ditch appeal for an endangered Senate Democrat in Indiana.

"You gotta get to the polls on Tuesday, and you gotta vote," Trump implored a crowd in Macon, Georgia, where he campaigned for the Republican gubernatorial candidate in one of the country's tightest major races.

"The contrast in this election could not be more clear."

Obama also laid into the president for the investigations into Russian interference in the US election that are weighing on his administration.

"They've racked up enough indictments to fill a football team," Obama scoffed. "Nobody in my administration got indicted."

Political passions have risen to a rare peak, with early voting in some states already running far ahead of normal levels.

"It's all about turnout," Senator Chris Van Hollen told "Fox News Sunday," as Democrats wage what polls say is an uphill battle to win control of the US Senate.

Democrats are far better positioned for reclaiming a majority in the House, experts and polls say.

But in the first midterm under Trump -- an utterly unconventional president -- there are many unknowns, above all the bottom-line impact of a president who has driven both supporters and foes to a rare fever pitch of emotion.

"I can't speak to the blue, but I can speak to the red," Trump said earlier of Democrats and Republicans. "There is a lot of energy out there."

The party of a first-term president tends to lose congressional seats in his first midterm. But a healthy economy favors the incumbent -- and the US economy has been growing with rare vigor.

A new Washington Post-ABC News poll suggested that while Democrats retain an edge in their battle for the House, Republicans could take advantage of increasingly positive assessments of the economy and by Trump's harsh focus on border security.

It found registered voters preferred Democratic candidates for the House over Republicans by 50 percent to 43 percent, but that was down from a 14-point advantage in August.

But in what could be a sharp warning sign for Republicans, that poll reported college-educated white women -- the so-called suburban moms seen as crucial to the 2018 outcome -- favor Democrats by a substantial 61 percent to 33 percent.

Another wild card: The campaign's closing days come just a week after a gunman, who allegedly hated immigrants and Jews, killed 11 people at a Pittsburgh synagogue.

A fanatical Trump supporter was also arrested on charges of mailing pipe bombs to prominent opponents of the president, including Obama.

The president's critics say the highly charged atmosphere he has helped create made the two attackers feel sufficiently comfortable to carry out their crimes.

Republicans, trying to move past that, have been enthusiastically pressing the economic argument.

But the president -- to the unease of some in the party -- has instead used his nearly nonstop schedule of campaign rallies to keep the spotlight on what he calls the security threat from migrants seeking to enter the nation through Mexico.

"We're not letting these people invade our country," Trump declared.

Democrats painted sharp distinctions with Trump, insisting that only they will protect the health care gains made under Obama, that Trump has employed inhumane measures to keep migrants out, and that the divisiveness he has fostered must end.

Obama meanwhile did what many Democratic candidates have refrained from doing: directly challenging the president.

"There's got to be consequences when people don't tell the truth, when words stop meaning anything. When people can just lie with abandon, democracy can't work," he told a cheering crowd as he campaigned for Senator Joe Donnelly.

"The only check right now on the behavior of these Republicans is you and your vote."

General » Be a reporter: Write and send your article » Subscribe for news alert
Tags: US, politics, Vote