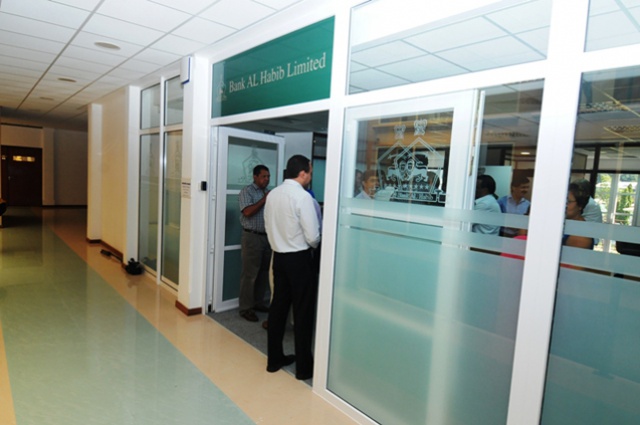 (Seychelles News Agency) - Pakistan’s banking multinational Bank Al Habib which specialises in trade finance mainly focusing on imports and exports has set up its offshore base on Mahe, the main island of the Seychelles archipelago.

The island state's Vice President Danny Faure opened the bank which is located at the Capital City Building in Victoria on Tuesday. This marked the bank's entry into Africa.

The bank's Country Manager Azhar Zaidi believes that being a trade finance bank; they will make a difference not only to Seychelles but also to the entire African continent. All transactions which will be initiated or finalised in the African region will be going through Seychelles, lifting the financial prospectus of the island nation and lifting the profile within the business and high finance circles.

Zaidi says that Bank Al Habib’s chose Seychelles as a result of its ideal location together with a supportive government which has friendly policies and strong banking laws.“After Mauritius, Seychelles is the place for banking, catering for banks such as Barclays, BMI and MCB.” Zaidi says.

By opening a major branch in Seychelles, Bank Al Habib has vindicated this island nation’s credibility. In the recent past Seychelles has been mentioned in adverse press reports as a safe haven for money launderers, a claim that has yet to be verified.

According to Zaidi his bank had conducted a due diligence before setting up its base in Seychelles. Among the key components that impressed the bank was the existence of the Financial Intelligence Unit (FIU) whose mandate is to combat money laundering and illegal financial activities. In addition, Bank Al Habib has retained its traditional banking model espoused by its founders anchored on honesty.

Since its establishment the bank has made it a policy to only deal with certified businesses and conducts thorough background checks to verify their customers working with the respective national central banks and security agencies. This banking approach has seen Bank Al Habib emerging as one of the major banks in Asia.

Although Bank Al Habib and Habib Bank trace their roots to the same founding families, the owners are different. The two lenders are rivals in the banking sector and serve different niche markets. Zaidi further told SNA that trade finance is a service not offered by many banks in Seychelles, and with the increasing global economy they are confident that the services that they currently offer will meet the public needs. According to Zaidi, Bank Al Habib is confident in establishing themselves as a major bank in the Seychelles and in the wider Indian Ocean region which has been in the news lately as a major business hub.

Bank Al Habib comes with a strong and attractive portfolio as one of Pakistani’s leading international banks. Among the 40 banks in Pakistan, 15 per cent of the total Pakistan trade business is held by the Bank Al Habib alone. With the opening of the latest country branch in Seychelles the bank has now increased its international range bringing it to six. The others are in Bahrain, Malaysia, Dubai, Turkey and China. The immediate future plans of the bank include opening new branches in Hong Kong and another in Africa to complement the Seychelles one.

They hope to bring a good name and promote the Seychelles. People are very much accessible at all levels, and they wish to reciprocate."If I want to see a minister it is not as difficult as it would be in another country, and this gives us the energy and courage to make a difference in Seychelles," says Zaidi.