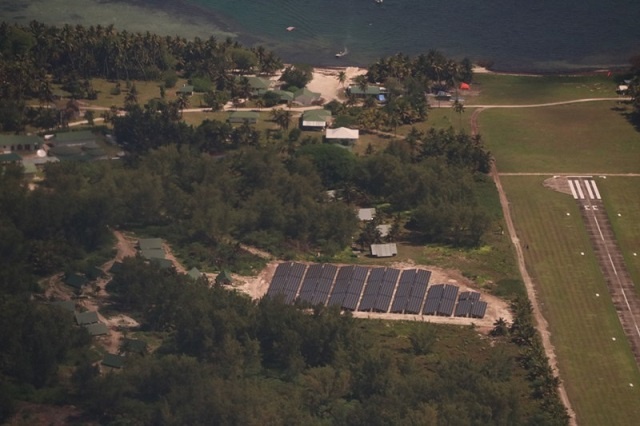 (Seychelles News Agency) - The remote island of Alphonse is now completely powered by the largest photovoltaic farm in Seychelles, meaning diesel fuel is no longer needed to make electricity, said a top official of the Islands Development Company.

A total of 2,220 dual glass high-efficiency solar panels have been installed on 0.7 hectares of land -- half towards the east and the other half towards the west -- to produce electricity for the whole island.

The project is an initiative of the Islands Development Company (IDC) as a source of alternative energy to cut costs and reduce the amount of heavy diesel fuel used to power two electricity generators on the island. The project will also help to protect the environment from pollution.

The IDC’s chief executive officer, Glenny Savy, said that the project is a real cost efficient project which will save the island a lot of money.

“For the past months only five barrels of fuel has been used to power the standby generators as compared to five and seven barrels of fuels used every day previously," said Savy.

Located 400 kilometres southwest of Mahe, the main island, the Alphonse atoll is part of the Alphonse group which also includes St. Francois and Bijoutier. The atoll has a single resort comprising of beach bungalows and suites.

The green energy project is a combination of the solar panels and lithium batteries for storage that has resulted in covering 90 percent of the island’s energy use. The solar panels produce around 800 kilowatts of electricity per day, more than half above the normal total electricity used every day on the island.

Savy said that this initiative will not only save money going towards fuel consumption but also that which is going towards the transportation of fuel to the island.

“IDC is making a profit on the electricity that it is producing by selling it. The money will go towards infrastructure development on the island,” said Savy.

The Minister for Environment, Energy, and Climate Change, Wallace Cosgrow, said that the project is one that other islands can follow as well as Mahe, which can one day be fully powered by renewable energy.

Aside from Alphonse, a similar PV farm will be set on Astove and Farqhuar islands by March 2019 and the bigger one on Desroches island by July next year. By early 2020 all islands under the management of IDC will be 90 percent powered by green energy.

The 2.5 percent is expected to increase to 5 percent in the coming three years with several renewable energy projects.

Seychelles is also planning to install Africa’s first utility-scale Floating Solar Photovoltaic system on the lagoon at Le Rocher, in the district of Les Mamelles.