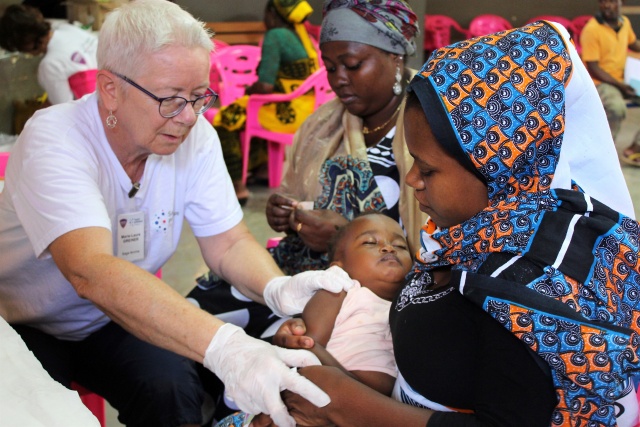 A woman receives free vaccination for her child in a public library that has been temporarily transformed into vaccination center in Koungou, on the French territory of Mayotte on June 13, 2018. From May 22 to June 30, nearly forty vaccination centers, a hundred health reservists and about sixty translators welcome parents and children under six to administer, as needed, three vaccines covering ten diseases. (Ornella LAMBERTI / AFP)

Situated between Madagascar and Mozambique, Mayotte is the only island in the Comoros archipelago which did not split from France after an independence referendum in 1974.

Even though Mayotte opted to remain with its colonial-era power, the Comoros still claims control -- in which it is backed by several UN resolutions -- in a territorial dispute with France.

"Countries which organised the separation of Kosovo from Serbia, Mayotte from the Comoros, and have tried several times to change regimes in countries where they considered it necessary, show blatant double standards," said Lavrov, alluding to Western countries.

Mayotte, comprising two islands, Petite-Terre and Grande-Terre, today has the administrative status of a French "department," roughly equivalent to a county.

This entitles it to support for infrastructure, medical care, and education just as in mainland France.

Its citizens, living in the farthest region of the European Union, have unfettered rights to travel, work and live in the EU.