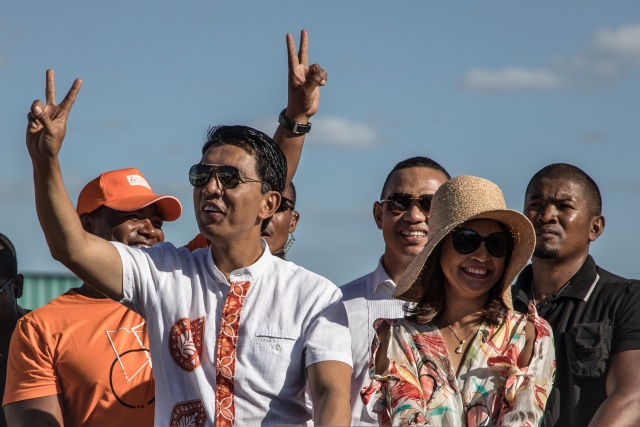 Madagascar presidential candidate Andry Rajoelina (L), flanked by his wife Mialy Rajoelina (R), greets supporters as he leaves the airport in Tulear airport, on November 4, 2018. Former President Marc Ravalomanana and rival Andry Rajoelina are frontrunners in the November 7 ballot in Madagascar, where protests earlier this year erupted over a government attempt to reform electoral rules. After months of tension, the Constitutional Court ordered a caretaker government to organise the ballot. If none of the candidates gets more than 50 percent of the votes cast, a second round will be held on December 19. (MARCO LONGARI / AFP)

Rajoelina and Ravalomanana were frontrunners in the November 7 vote in the poor Indian Ocean island that has struggled with instability since independence from France in 1960.

After counting from 30.6 percent of polling stations, Rajoelina was ahead with 40.9 percent of the votes against 36 percent for Ravalomanana, the CENI electoral authority said.

Ravalomanana's camp said he would stage an impromptu visit to the CENI offices on Monday morning at 0500 GMT to inquire about his shrinking share of the vote.

Outgoing president Hery Rajaonarimampianina had seven percent of ballots, it said. His attempts to change the electoral laws this year backfired, sparking nearly three months of sometimes violent protests in the capital Antananarivo.

The demonstrators forced Rajaonarimampianina to accept a "consensus" government tasked with organising the election in an impoverished country burdened by a long history of coups and unrest.

Madagascar's electoral regulations mean the two frontrunners will be forced into a run-off in December if neither manages to secure more than 50 percent of the votes in the first round ballot.

Both Ravalomanana and Rajaonarimampianina, who governed from 2014 to September 2018, have denounced irregularities and fraud, but the national election commission has rejected the accusations.

The EU observation mission said it noted only minor irregularities that would not impact the election outcome.

It has struggled to overcome political divisions after a disputed 2001 election that sparked clashes and after a 2009 military-backed coup.