Player database would boost Seychelles' under-23 chances against Sudan 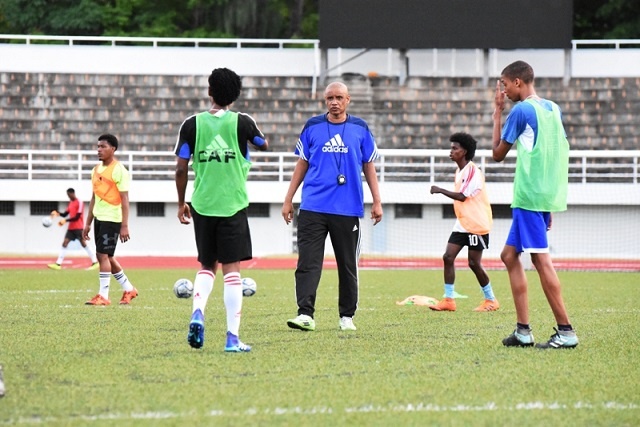 The under 23 selection in a training session with coach Nolin. (Jude Morel)

(Seychelles News Agency) - The Seychelles men’s national under-23 football team will face Sudan in a qualifying match of the Africa Cup of Nations (AFCON) on home ground on Wednesday.

The match is scheduled for 5.30 p.m. local time at Stad Linite.

As Seychelles was focusing more on the senior and under-20 football selections, the team for the match against Sudan started training together only last week.

Team coach Cliff Nolin told SNA on Tuesday that there has not been enough preparation for the match on Wednesday.

“We only had three training sessions without any test match so it won’t be easy to play a match at this level. For this kind of competition, you need to be well prepared. I am sure Sudan is well prepared for the match,” said Nolin.

He added that the outcome of the match will depend a lot on the players themselves if they are able to implement the tactics learned in the few training session.

“Even in terms of players, if we had enough time we could have recruited other players and built up the team’s ability to face Sudan,” said Nolin.

The Secretary-General of the Seychelles Football Federation, George Bibi, told SNA that the short notice is because there was no plan to compete in this age group but since it’s a qualification for the Olympic Games it gives the young players an opportunity.

Coach Nolin said the match will be a test for the young players and one where he “will need to analyse the opponents at the beginning of the game and see how it progresses then adjust accordingly.”

He told SNA that selecting players would have been easier if Seychelles had a database of the players and their details including date of birth.

“One of the problems we have is that we don’t have the list of players in Seychelles and their ages so that we can identify players early. This is what other countries have so it’s easier for them to make a selection at whatever ages,” said Nolin.

The 2019 Africa under-23 Cup of Nations is the third edition of the competition which is organised every four years by the Confederation of African Football (CAF).

The qualification matches will be played on a home-and-away two-legged basis. The first round will take place from November 12-20.

The tournament determines which three African teams will compete at the 2020 Summer Olympics men's football tournament in Japan. The finals will be held in Egypt next year and the winner gets automatic qualification for the Olympics.

Nigeria are the defending champions.