UN to lift sanctions on Eritrea 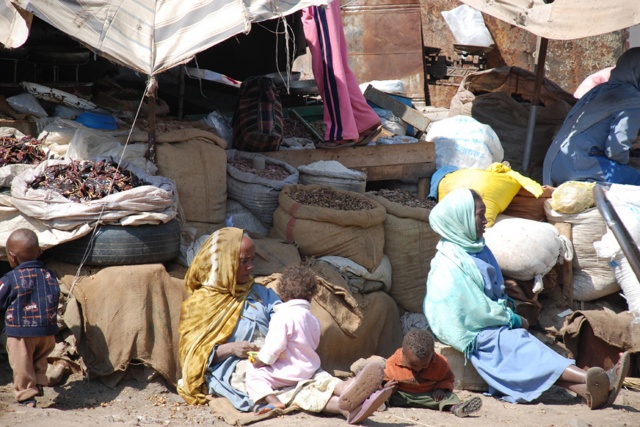 Women tend to their market stalls in the Eritrean capital Asmara on November 3, 2007. The red and blue logo of US-government food aid is a common sight in Eritrea. Donated grain sacks are re-stitched as popular shopping bags, while cooking oil tins bloom with colourful flowers on window sills. Any food inside, however, has long gone. This fiercely independent Horn of Africa country ended free distribution of food aid in 2005 after illegally seizing thousands of tonnes of grain, saying it was determined to feed itself without outside help. (AFP PHOTO/Peter MARTELL)

(AFP) - The UN Security Council will on Wednesday vote to lift sanctions on Eritrea following a landmark peace deal with Ethiopia and a thaw with Djibouti that have buoyed hopes for positive change in the Horn of Africa.

Diplomats say they expect the council to unanimously adopt a British-drafted resolution that would lift the arms embargo and all travel bans, asset freezes and targeted sanctions on Eritrea.

The council slapped sanctions on Eritrea in 2009 for its alleged support of Al-Shabaab insurgents in Somalia, a claim Asmara has long denied.

The draft resolution acknowledges that UN monitors have "not found conclusive evidence that Eritrea supports Al-Shabaab" and declares that the sanctions and arms embargo will end on the day of the adoption of the measure.

Eritrea and Ethiopia signed a peace deal in July that ended two decades of hostility and led to friendlier relations with Djibouti, shoring up prospects for stability in the Horn of Africa.

The draft resolution calls on Eritrea and Djibouti to continue efforts to settle a 2008 border dispute and asks Asmara to release information concerning Djiboutian soldiers missing in clashes a decade ago.

At France's request, the council will hear a report every six months on Eritrea's efforts to normalize relations with Djibouti, where France, the United States and China all have military bases.

Ethiopian Ambassador Taye Atske Selassie said the end of sanctions will "definitely open up a lot of possibilities for Eritrea," drawing foreign investors and bringing Asmara back into the international fold.

"The decision will give an impetus for us to look to what the future can offer to the people of the region while at the same time send a message for us to engage in solving current problems and challenges," the ambassador told AFP.

Eritrea and Somalia strongly supported calls to end sanctions, and negotiations over the past two weeks focused on addressing concerns about Djibouti.

"There were concerns by Djibouti," the ambassador said, "but these concerns are not insurmountable. We strongly believe that the leaders of these two countries are willing to deal with the issues."

In his address to the General Assembly in September, Eritrea's Foreign Minister Osman Mohammed Saleh slammed the sanctions as "unwarranted," saying they had caused "considerable economic damage" and hardship for Eritreans.

Eritrea gained its independence from Ethiopia in the early 1990s, and war broke out later that decade over a border dispute.

A 2002 UN-backed boundary demarcation was meant to settle the dispute for good, but Ethiopia refused to abide by it.

A turnaround began in June when Ethiopia announced it would hand back to Eritrea disputed areas including the flashpoint town of Badme, where the first shots of the border war were fired.

The leaders of Somalia, Eritrea and Ethiopia met last week in northern Ethiopia to push for regional economic development.

The draft resolution however maintains an arms embargo on Somalia, imposed in 1992.