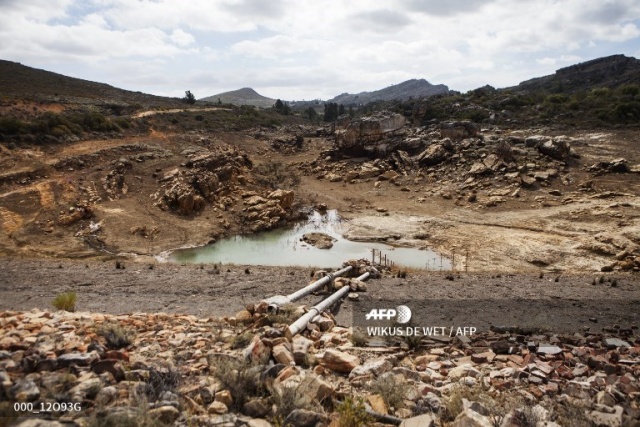 An nearly water empty dam is pictured on a farm in Piket Bo-berg, Piketberg, north of Cape Town, on March 7, 2018 as a result of a three-year-long drought. Fruit farmers in the Piket Bo-Berg, who have been struggling with drought for the past three years, had to adapt their ways of farming to still be able to produce a profitable harvest. (WIKUS DE WET / AFP)

(AFP) - The South African city of Cape Town, which nearly ran out of water this year, could beat future droughts by cutting down non-native trees including pine, acacia and eucalyptus, according to a study released Friday.

The tourist hotspot was weeks away from turning off all household and business taps before strict rationing and much-needed rain enabled it to escape so-called "Day Zero", but severe drought remains a threat.

A report by the Nature Conservancy conservation group said that removing non-native water-hungry trees from catchment areas would be far cheaper than other solutions such as desalination plants.

It said two months of water supply each year could be saved by a $25 million programme over 30 years to clear away invasive alien trees in seven catchment areas that supply three-quarters of Cape Town's water.

Non-native trees, which have spread from commercial plantations and seeded hillsides, are far thirstier than indigenous vegetation such as local "fynbos" plants.

They use more groundwater and interrupt rainfall that would otherwise run off into soil and rivers and feed dams.

Analysis by the US-based Nature Conservancy has shown that an estimated 55.4 billion litres (14.6 billion gallons) of water could be saved within six years if alien plant invasions are tackled.

"To secure our long term water supplies, we need to pursue a range of cost effective strategies. One of those is to clear vegetation in our catchments that reduce the runoff into our dams," said Ian Neilson, Cape Town deputy mayor.

Cape Town dams are currently 70 percent full after good rains, but the city says the threat of drought remains high and has called on residents to continue to restrict water use.