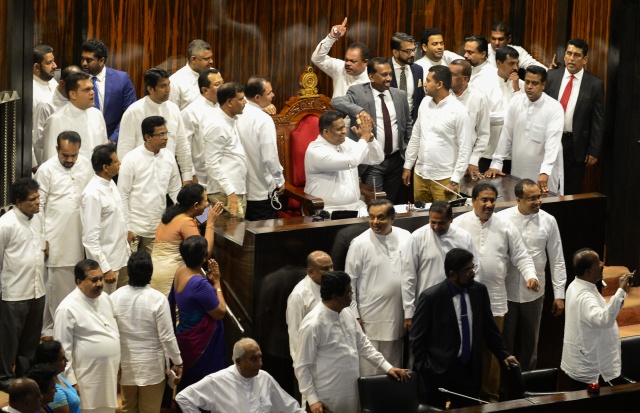 Sri Lankan legislators occupy the speaker's seat in the parliament assembly hall in Colombo on November 16, 2018. Sri Lanka's parliamentary speaker required police protection as violence returned to the legislature for a second day November 16, with rival factions in the island's constitutional crisis showing no signs of backing down. A group of legislators occupied speaker Karu Jayasuriya's chair for 50 minutes and he was only able to take his seat after he entered the assembly ringed by unarmed officers and parliamentary staff. (LAKRUWAN WANNIARACHCHI / AFP)

(AFP) - Sri Lanka's political crisis escalated Friday with the sacked prime minister demanding his job back shortly after passing another no-confidence motion against his controversial successor amid unprecedented rioting in parliament.

The Indian Ocean nation has been paralysed since October 26 when President Maithripala Sirisena sacked Ranil Wickremesinghe as premier and replaced him with former strongman Mahinda Rajapakse.

With a second no-trust vote against Rajapakse Friday despite raucous scenes that involved his supporters throwing chilli powder at their opponents, Wickremesinghe demanded the restoration of status quo prior to October 26.

"Let the status quo come back," Wickremesinghe told Colombo-based foreign correspondents at his Temple Trees residence where he remained holed up after refusing to accept his sacking three weeks ago. "The country needs stability. That is the main issue."

He said he was also ready to work with Sirisena despite their bitter personality clash that triggered the unprecedented constitutional crisis last month. There was no immediate comment from Sirisena.

On Friday speaker Karu Jayasuriya was blocked from taking his chair for almost an hour by a group of legislators backing Rajapakse.

Rioting MPs took away the ornate ceremonial chair, but staff carried in an ordinary office chair as a makeshift replacement.

However, rioters grabbed that chair too, breaking it into pieces that were then used as projectiles to attack rivals and police.

"We haven't had a situation where the speaker was prevented from entering the chamber," former sergeant-at-arms Wijaya Palliyaguruge told AFP. "This is also the first time that the speaker had to come in with police protection."

"Sri Lankans have again seen deplorable behaviour by some MPs, unbecoming of them and of their noble institution," Dauris said on Twitter. "No parliament can perform its role when its own members stop it from doing so."

Standing in a corner with a human shield of khaki-clad constables, the speaker, in his usual black and gold robes, used a wireless microphone to take a voice vote on a revised no-confidence motion against Rajapakse.

Rajapakse lost a similar vote on Wednesday, but refused to step down saying that vote was not taken properly. His party had acknowledged that they did not command a majority in the 225-member assembly despite attempts to engineer defections.

President Sirisena, who has the power to appoint a new prime minister, told political parties representing a majority of legislators on Thursday night to submit an amended motion to confirm the toppling of Rajapakse.

On Thursday MPs moved another resolution against Rajapakse, this time to reject his call for snap elections. That vote could not go ahead after parliament descended into chaos, as punches and projectiles flew.

Rajapakse himself stayed away from the rioting and walked out of the chamber after the no-trust motion was passed against him.

A Rajapakse loyalist was seen throwing chilli powder at rival legislators and police. At least 11 constables and several legislators were taken to the parliament's medical centre for first aid.

Gamini Jayawickrema Perera, a legislator from Wickremesinghe's party, said he was among those treated after chilli mixed with water was thrown at his face.

Leftist lawmaker Vijitha Herath said he suffered a forehead injury when a rival hit him with a hard-cover copy of the constitution that was on the speaker's table.

"I was also attacked with chilli water," Herath said. "Usually, chilli powder or water is the favourite weapon of bank robbers and gangsters."

Rajapakse's spokesman Keheliya Rambukwella denied they attacked police or staff, but blamed the speaker for the chaos.