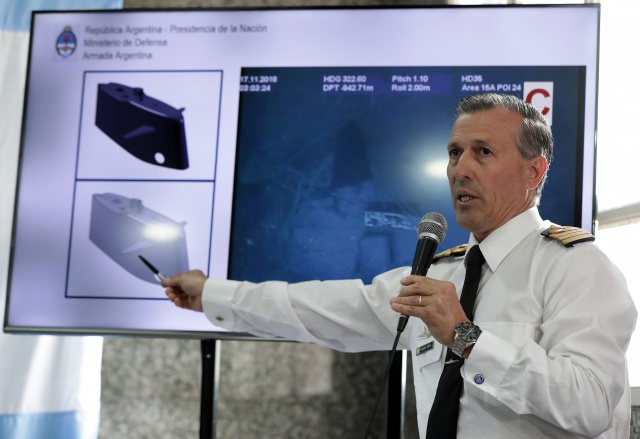 (AFP) - The crushed wreck of an Argentine submarine has been located one year after it vanished into the depths of the Atlantic Ocean with 44 crew members, in the country's worst naval disaster in decades.

Experts say raising the ARA San Juan submarine would be an enormous undertaking costing a billion dollars or more. Defense Minister Oscar Aguad said Argentina had "no means" to do so.

The navy located at the submarine at a depth of more than 800 meters (2,600 feet), the navy tweeted, confirming the vessel had imploded.

Relatives of the dead sailors were seen hugging each other, holding their heads in despair and crying inconsolably.

The Seabed Constructor, a ship owned by US search firm Ocean Infinity, made the discovery Friday, one day after the first anniversary of the disappearance.

The ship had set out in September in the latest attempt to find the San Juan, whose disappearance cost the navy's top officer his job.

The navy lost contact with the submarine on November 15, 2017, about 450 kilometers (280 miles) from the coast while it was traveling northward from Ushuaia, at Argentina's southern tip.

Admiral Jose Villan, the navy's new top commander, said that the rough terrain on the ocean floor made it difficult for search vessels, which had already trawled the site, to find the sub.

Pieces that were 11, 13 and 30 meters long were spotted in a "moon-like zone with craters and canyons," said Navy Captain Enrique Balbi, adding that the hull had been "crushed inwards."

Aguad met earlier with family members to show photos taken by an underwater robot. They showed a propeller, the sub's bow with torpedo-launching tubes and an upper section of the vessel lying on the ocean floor.

"We are all destroyed here," said Yolanda Mendiola, the mother of crewman Leandro Cisneros, 28.

"I still had hopes that they could be alive," Luis Niz, the father of a missing sailor, told reporters, even though President Mauricio Macri's government had declared two weeks after the sub's disappearance that there could be no survivors.

A small group of family members protested outside the naval base Saturday, holding a banner emblazoned with the number "44" -- for the lost crew members.

Lawyer Sonia Krescher questioned the timing of the sub's discovery, saying it was "weird" coming after the one-year anniversary of its loss.

"We are going to ask them to refloat it," she said. "We need to see the bodies and know what happened."

Cecila Kaufmann, who lost her husband Luis Leiva, added: "now that they've found it, they need to give us back our loved ones."

The discovery came the day after a somber ceremony, attended by Macri, at the San Juan's Mar del Plata base.

Macri said the "whole truth" about what happened can now be examined. But he made no reference to whether there would be an attempt to raise the wreck.

The Seabed Constructor made its discovery before leaving for maintenance in South Africa. Searchers decided to check an area that bad weather had previously prevented them from examining.

Equipped with cameras that can submerge 6,000 meters below the surface, the vessel was set to receive a $7.5 million reward for finding the missing sub.

Ocean Infinity was also assigned the task of hunting for Malaysia Airlines flight MH370, which vanished without trace in March 2014 en route from Kuala Lumpur to Beijing.

Experts say the submarine would have been crushed by water pressure once it dropped below about 600 meters. They believe that water seeped inside through a defective snorkel valve, triggering the tragedy.

The San Juan's loss was the first major tragedy to hit Argentina's navy since the Falklands War against Britain in 1982.

Argentina's navy has been criticized for its clumsy handling of the case since first reporting the San Juan -- one of the country's three submarines -- was overdue at Mar del Plata on November 16, 2017.

It took naval officials days to acknowledge that the old, German-built submarine had reported a problem with its batteries in its final communication.

And it took them 10 days to say there had been an explosion on board, which experts said was likely linked to the battery problem.

Argentina has spent more than $25 million in its search operation.