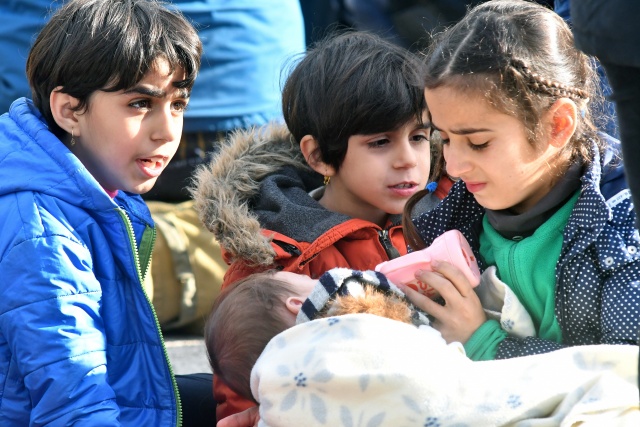 Migrant children feed an infant while a group of approximately 100 Asian migrants gather in the vicinity of Maljevac border crossing near Northern-Bosnian town of Velika Kladusa, on October 24, 2018. Illegal migrants gathered near the border crossing in an attempt to cross into neighboring Croatia. Officers of Bosnian border police and Croatian police prevented the migrans from crossing the border line between the two countries. Numbers of migrants who are passing through Bosnia during the past few months on their way towards the European Union, is on a constant raise. Migrants stop in Sarajevo where they rest before continuing their journey towards North-Western Bosnia and Croatian border. Until recently, Bosnia and its mountainous terrain were avoided by migrants travelling from northern Africa, Middle East or Asia, who, despite the closure of EU borders in March 2016, continued to pass through the Balkans. But, since late 2017 Bosnia is facing the passage of thousands of migrants, who are now stranded. (MILAN RADULOVIC / AFP)

(AFP) - The United Nations on Tuesday called on countries to step up efforts to integrate the growing numbers of refugee and migrant children worldwide into their education systems.

The number of school-age migrant and refugee children has risen 26 percent since 2000 to some 18 million, the UNESCO cultural agency wrote in its 2019 Global Education Monitoring report.

Around half the world's forcibly displaced people are under 18, and often have little if any access to public education systems in the countries where they are seeking asylum.

Even if they are not excluded outright, host countries often lack the resources to offer language classes and ensure the integration of refugee children.

Lebanon and Jordan, with the largest number of refugees per capita as people fled the civil war in neighbouring Syria, have imposed separate morning and afternoon classes for citizens and refugees.

Even wealthy Germany would need 42,000 new teachers to properly educate the refugee children taken in as part of Chancellor Angela Merkel's open-door policy enacted in 2015, which has since been sharply curtailed, the report found.

"Education is the key to inclusion and cohesion," UNESCO's chief Audrey Azoulay said in a statement.

"Increased classroom diversity, while challenging for teachers, can also enhance respect for diversity and be an opportunity to learn from others," she said.

The report also found that first-generation migrants represented 18 percent of students in high-income countries in 2017, up from 15 percent in 2005, representing 36 million students.

But in the EU these students are twice as likely to drop out of the education system early than native-born students.

And in the 34 countries of the Organisation for Economic Cooperation and Development (OECD) they were 32 percent less likely on average to achieve basic skills in reading, maths and science in 2015.

"Countries cannot think the job is done once immigrants are in school," said Manos Antoninis, director of the education report.

Too often, he said, "They end up in slower school tracks or in under-resourced establishments in troubled neighbourhoods."

UNESCO said that in the two years since the adoption of the New York Declaration for Refugees and Migrants in 2016, refugees have missed a combined 1.5 billion days of school.