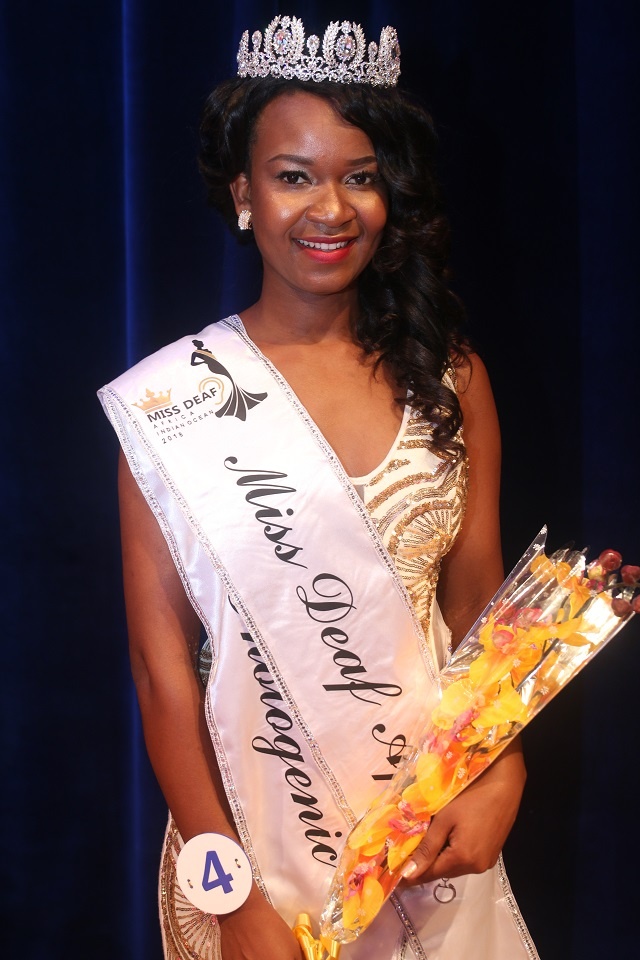 The two events were organised concurrently in Seychelles on Saturday at the International Conference Centre.

“I did not expect the crown to come my way today. I am very happy, emotional and surprised,” Mundine told the press at the end of the pageant.

She said that this is her first time in Seychelles and that “it has been a very pleasant journey. I love the food and exchange I have made with the other contestants.”

The winner of the continental pageant was crowned by the reigning Miss Deaf Africa for 2017, Nasjtassia Khoner, from Namibia.

The pageant saw the participation of nine contestants from different parts of Africa.  Seychelles, an archipelago in the western Indian Ocean, was represented by 27-year-old Debra Dogley.

The newly crowned Miss Deaf Africa said that her project will focus on people with hearing impairment on the African continent so that they also get the same opportunity.

“People with hearing problems like us often tend to get marginalised. I want this to change and I want to work with them, to lobby for them,” said Mondine.

On her side, Adeline, the first Miss Deaf Indian Ocean, said, “I am very happy with the achievements I have made. I think it is the best thing that has ever happened to me. I thank all the contestants for their support and the journey we have travelled together. Without them, on the pageant, I wouldn’t have won the title.”

The pageant included a catwalk by the contestants in their traditional costumes. Contestants also showcased their talents in traditional dances and mime.

Anita Gardner, the chief executive of Miss Deaf Africa and chairperson of the Seychelles’ Association of People with Hearing Impairment (APHI), the organiser of the event, said that the pageant has been a success and will be organised in Seychelles until another country decides to take ownership over it.

“Africa has so much diversity in culture, traditions and beliefs and I see this pageantry as one of the means of entertainment that can bring all these together under one platform," said Gardner. She added that working with girls has been an amazing experience and of the first day “we got together, we had to agree on a common sign language to communicate throughout and during the pageant.”

The Miss Deaf Indian Ocean and Miss Deaf Africa pageant was organised as a celebration and serves to honour the members of the deaf community in Africa.

Hearing-impaired community in Seychelles gets its first sign language dictionary