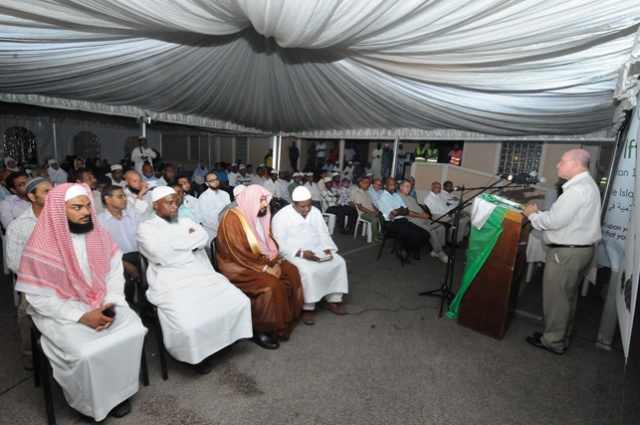 "It is very important that we retain our social cohesion and our harmony." St. Ange addressing the Muslim community in Seychelles (Seychelles Nation)

(Seychelles News Agency) - This weekend saw the small Indian Ocean island nation of Seychelles adding on its diversity management credentials and solidifying its cultural tolerance bonds. This took place at the gold-domed Mosque and Islamic Centre in the capital city of Victoria on Saturday when non-Muslims from government and civil society gathered together with Muslims at sunset for Iftar.

For Muslims around the world currently observing the fasting month of Ramadan, iftar is a much-appreciated part of the day as it is the traditional sundown meal that breaks the Ramadan fast. The event begins with a call to prayers (azaan), followed by the breaking of the fast and then congregational prayers.

Tourism minister Alain St. Ange, Francis McGregor who is the president of the Seychelles appeals court and designated minister Vincent Meriton, led the government delegation for the event hosted by The Islamic Society of Seychelles (ISS).

Maldivian Imam Hamid Falah Al-Ameen recited from the Qur’an, and a sermon was  delivered to the congregation by Saudi-Arabian Imam, Sheikh Faizal Al-Anasi.

“For me, religion is part of our culture, and the respect for culture is the base for a solid integrated society,” St. Ange said. “This is why as minister responsible for culture I am happy to see culture in all its forms take root.”

A growing faith in Seychelles

Although Muslim seafarers and traders visited the Seychelles archipelago long before the European discovery of the islands, Islam was not officially established on the islands until the first mosque was built in 1982.

Renovations in the current mosque were completed two years ago and it has a capacity of 900 worshippers., Construction of a second mosque was completed late last year in Mont Fleuri district, east of Mahé. Another small mosque was recently opened on the second-largest inhabited island of Praslin and there are plans to cater for the Muslim community in the south of Mahé by building another place of worship in the region.

“The Muslim population in Seychelles has risen from under a hundred persons in the 60s to nearly 2,000 today,” St. Ange said. “In our melting pot of cultures, the Muslims live side by side with people of different faiths, and peace and harmony prevails.”

Ramadan, the ninth month in the Muslim calendar, is a special time for Muslims, who regard the time as a most blessed month, and a time for reflection, prayer and renewal of faith. The faithful fast to complete one of the five pillars of Islam and to achieve greater self-discipline, self-purification, and compassion for those less fortunate.

Multicultural iftar dinners are regularly held throughout the world as a way to bring Muslim and non-Muslim communities together to learn more about each other’s faith and beliefs.

Eid-ul-Adha, which is the end of the fasting month, is marked by a day of feasting and family-oriented activities. The day is celebrated at the sighting of the new moon and is expected to be celebrated this year around the 29th July.

“It is very important that we retain our social cohesion and our harmony despite being a mixture of different races, of religions and cultures fusing together as our unique brand as Seychellois.” St. Ange said as he took wished the Seychellois Muslim community an early Eid-ul-Fitr. “This is why we are, and this is why we remain, an excellent showcase to the world of a people living in harmony with the environment and with each other, and well-integrated despite our differing origins of race and color of skin.”