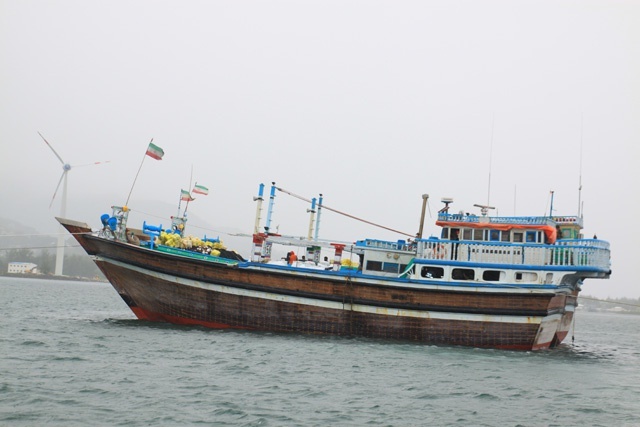 An Iranian dhow intercepted in December 2014 after being suspected of fishing illegally in the Seychelles waters. (Joe Laurence, Seychelles News Agency)

The Iranians' vessel -- a dhow-- was intercepted in the Seychelles’ waters by the Anti-Narcotics Bureau (ANB) together with the Seychelles Coast Guard on Thursday, November 22, ANB said in a communiqué on Sunday. Five hundred grams of what is suspected to be cannabis resin and 2.5g of heroin was seized onboard.

Only eight out of the 10 Iranians appeared in court on Monday together with two  Seychellois who were arrested last Saturday in connection with the case.

The lawyer of the Iranian suspects, Clifford Andre, said that “out of the ten Iranians only eight have been able to come to the court as two have been admitted to the hospital after being badly beaten by officers who conducted the search on the boat.”

Andre, who was lobbying the court to release the Iranians on bail, said that the 2.5g of heroin was found on only one suspect for his own consumption and there is no reason to remand all the suspects on the same ground.

“This is because the two Seychellois have been brought before the court on the basis of conspiracy and until now nothing has been brought forward to justify the link between the Iranians and the Seychellois, who were found in the vicinity in their own boat during the operation by ANB,” said Gabriel.

This is not the first time Iranians national have been arrested in the Seychelles’ waters on drug-related cases.

In January, the Supreme Court of Seychelles sentenced two Iranian nationals to life in prison for the importation of heroin and opium. The two convicts --– Emam Bakhsh Tarani and Hattam Mothashimina -- were both found guilty of four offences under the Misuse of Drugs Act.

Both Iranians and nine other crew members were arrested on board a dhow, a type of sailing vessel common to the Gulf Arab states, in mid-April 2016, following a joint operation by the Seychelles Coast Guard and the former National Drugs Enforcement Agency (NDEA).

The other crew members were found not guilty and released by the court late in 2016. The eight Iranian were repatriated to their country in June last year.