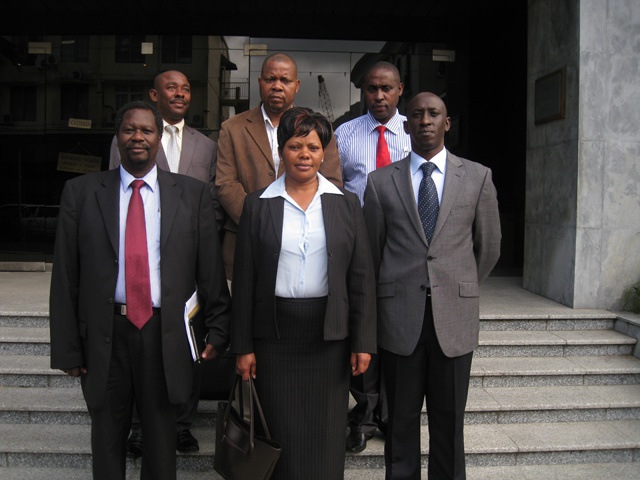 The Kenyan delegation during their familiarisation visit in Seychelles with the FRC Head Mr. Kitili (Far left in the front row)

(Seychelles News Agency) - The western Indian Ocean region is keen to fight money laundering and transnational crime. This was the message from the Seychelles Financial Intelligence Unit (FIU) a day after it hosted the Financial Reporting Centre (FRC) a counterpart agency from Kenya. The FRC is Kenya’s main agency tasked with combating money laundering and tracking down proceeds of crime.

The Kenyan delegation was visiting Seychelles to learn more on the work of FIU in a visit facilitated by INTERPOL’s regional office in Kenya. For some time now INTERPOL has been encouraging other anti-money laundering agencies within the region to visit Seychelles Attorney General’s office and the FIU to learn of the island nation’s best practices in effective legislation and confronting money-laundering.

On March 1 Seychelles Financail Services Authority (FSA) began operations as the country’s regulator of the securities exchange, corporate services provider, insurance and other financial services sector. The visit comes three weeks after Kenya and its southern neighbour Tanzania were removed from the global watch list of countries not doing enough to contain money laundering by the Financial Action Task Force (FATF) an intergovernmental agency. Both  Tanzania and Kenya have in the recent past made major strides in setting up legal and regulatory frameworks to combat money laundering which saw them being removed from the list. The Paris based FATF set up in 1989 says its main work revolves around “combating money laundering, terrorist financing and other related threats to the integrity of the international financial system.”

As early as 2008 the western Indian Ocean region nations have forged stronger ties after transnational organised criminal threats ranging from piracy, drug smuggling and even money laundering. Jackson Kitili, the director of FRC led the 6-man Kenyan delegation to Victoria and held discussion with the Seychelles Police, National Drug Enforcement Agency (NDEA) and the Attorney General’s office. This visit followed the signing of a memorandum of understanding between the two financial crimes watchdogs aimed at improving cooperation on security concerns touching on the financing of terrorism, piracy, drug trafficking and money laundering

“The visit was more of a familiarization tour and aimed at building closer ties between regional countries to combat financial crime across borders.” Jean Hassan spokesperson of FIU says.

In the last three months seizures of drugs worth millions of dollars has been made in the within the region. In April the Australian Navy seized €210 million worth of drugs in the Indian Ocean and a week ago 342kgs of heroin worth €15.1 million was nabbed in a vessel in the Kenyan coast. The seizure of these consignments of drugs has increased the need for more cooperation on transnational crime.

Seychelles authorities have in the recent past enacted and implemented legislation governing the offshore sector and intensified monitoring of its burgeoning offshore financial services sector shielding it from money laundering. A new body, the Financial Services Agency (FSA) was set up earlier this year as the regulator of Seychelles corporate services providers, securities exchange, insurance and other related businesses. 140,000 international business companies (IBC) make up Seychelles' offshore sector, compared to 650 companies when this island nation launched its offshore business in 1996.

In November 2013, Seychelles national assembly approved amendments to several  sections of its 1994 International Business Companies Act and introduced  a new section to ensure that the legislation and offshore sector were in line with international standards and recommendations by the  Organisation for Economic Co-operation and Development (OECD).

The OECD had raised concerns regarding Seychelles jurisdiction in terms of tax transparency rules, along with Switzerland and Cyprus. Seychelles foreign affairs minister Jean Paul Adam defended his country's reputation, saying it was committed to implementing internationally agreed tax standards.

“We have been receiving a lot of support from international partners and we are glad to share that experience with willing countries as it helps in fighting transnational crime.” Hassan says. “Willingness to cooperate with other financial intelligence units is a critical component of the FATF recommendations and a requirement of the UN Convention on Transnational Organised Crime.”