Seychelles pushes for ‘moutya’ dance to be recognised by UNESCO 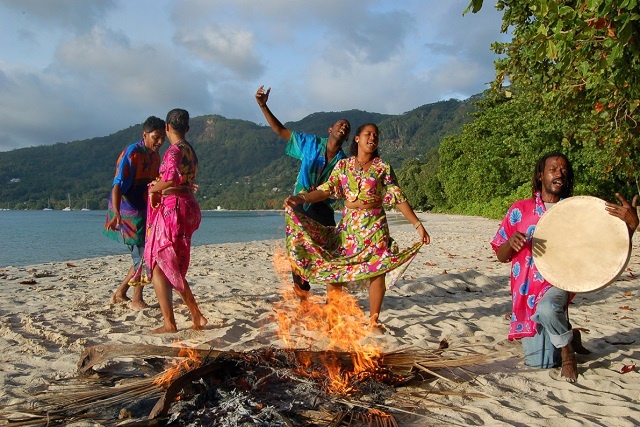 In Seychelles, Moutya is a traditional dance similar to the sega. (Gerard Larose, Seychelles Tourism Board)

(Seychelles News Agency) - The Seychelles’ Ministry of Culture has submitted documents to the United Nations Educational, Scientific and Cultural Organisation (UNESCO) for the consideration of moutya dance as a cultural heritage.

This move comes as the ministry starts to work in consultation with UNESCO to review the island nation's culture policy. The principal secretary for culture, Cecile Kalebi, said that this is the third time that Seychelles has tried to get the dance recognised.

“We have submitted our application to UNESCO and it was accepted. Next year, it will go on to committee level where our application will be thoroughly analysed and evaluated to see if ‘moutya’ can be considered a national heritage,” said Kalebi.

Moutya is a traditional dance similar to the sega. The rhythm for the dance is from a drum made with dried goat skin, which needs to be heated before the drumming starts.

The songs which accompany the dance are those that recount the hardship of everyday life. It is believed that the African slaves started the moutya.

Kalebi explained that it is important for the Seychelles to have a cultural heritage as currently there are two environmental world heritage sites. These are Vallée de Mai, a nature reserve on Praslin, the second-most populated island, where the endemic coco de mer grows in its natural state. The second site is the Aldabra Atoll.

“Cultural heritages link us to our history and also place our country on the world map. Already our two national heritage sites give Seychelles a good name out there. Many people who follow these applications want to see it happen in the original country. It is also our aim to keep these things alive in order to attract tourists but also to make us proud as a nation.”

The move to make moutya a cultural heritage comes one year after Seychelles -- a group of 115 islands in the western Indian Ocean -- submitted its final dossier to make Venn’s Town, site of an old mission community's ruins, its third world heritage site.

The Mission Ruins of Venn’s Town -- named after a church missionary Henry Vence, who set up the commune -- is located in the hills of the main island, Mahe, southwest of the Morne Seychellois national park. It is a place of unique historical, cultural, aesthetic and ecological value.

The principal research officer of the Seychelles National Heritage, Julianne Barra, said the site is one of the most renowned sites of the islands, with a rich history, and where foundations were laid for the islands education system.

“Venn’s Town was opened around 1875. It was a settlement with plantations of vanilla and patchouli amongst others, it can be considered as the foundation of formal education as this was the site for the first school for children of the liberated slaves,” she said

Last week, the regional advisor for culture for UNESCO’s regional office for Eastern Africa, Karalyn Monteil was on a working mission to the Seychelles.

“My visit is here is to share the findings of the report which we call reshaping cultural policy and assist Seychelles on how to reach its sustainable goals set by the United Nations and to reach the African Union’s Aspirations 2030 through the development of the cultural sector,” explained Monteil.

The culture department Principal Secretary explained that Seychelles already has a cultural policy, but explained that the way the world is changing, there is a need for the country to review its policies.

“Our country is becoming more and more multi-cultural and our wish is to protect our Creole culture. Our cultural policy will target the preservation and protection of our Creole identity,” concluded Kalebi.