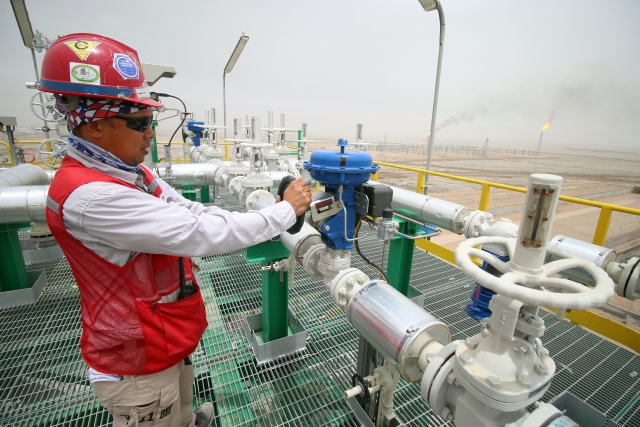 (FILES) In this file photo taken on May 09, 2018 An employee turns a valve at the Hammar Mushrif new Degassing Station Facilities site inside the Zubair oil and gas field, north of the southern Iraqi province of Basra on May 9, 2018. OPEC members and other oil-producing countries convene in Vienna this week December 2018 to discuss cutting their output targets, torn between plunging oil prices and pressure from the United States to keep prices low. Under the watchful eye of major producers such as Saudia Arabia and Russia, delegates from both the Organization of Petroleum Exporting Countries and around 10 other non-OPEC members -- which together account for more than half of total global output -- will first hold preparatory meetings earlier in the week and then full plenary sessions on Thursday and Friday. (HAIDAR MOHAMMED ALI / AFP)

(AFP) - OPEC members and other oil-producing countries convene in Vienna this week to discuss lowering their output, as they scramble to buffer their earnings against plunging crude prices, while also coming under heavy US pressure to ensure that the commodity stays cheap.

But ministers from the two oil-producing giants and their partners will have their work cut out for them if they hope to strike a deal at the plenary sessions on Thursday and Friday and to restore their market credibility.

If the 20 or so members of the Organization of Petroleum Exporting Countries and other nations -- which account for more than half of the world's oil -- continue to pump at current record levels, they risk seeing prices continue to tumble.

Prices have already plunged more than 30 percent over the past two months and a barrel of Brent crude, the European benchmark, currently stands at around $60.

But if oil producers close the taps, they risk choking off the global economy, which needs affordable oil to keep running.

OPEC kingpin Saudi Arabia, in particular, finds itself in a delicate position.

US President Donald Trump has repeatedly hit out at the oil cartel and accused it of keeping prices artificially high.

Riyadh will also be keen not to incur Trump's wrath as relations between the two countries become increasingly complicated in the wake of the murder of opposition journalist Jamal Khashoggi.

Nonetheless, "low prices are not an option for Saudi Arabia as it puts (Mohammed bin Salman's) domestic reform agenda at risk. So, it will be key to reach an understanding with Trump," analysts at Energy Aspects wrote in a research note.

For its part, Washington's position might also change rapidly, said UBS analyst Giovanni Staunovo, who noted that US shale producers need oil prices to be high to ensure the profitability of their operations.

"We believe that memories of late 2014, when OPEC failed to cut production and Brent oil prices nosedived to $45 per barrel in January 2015, remain fresh," Staunovo said.

But at the end of 2016, in a move to get the market back under control, the cartel teamed up with non-OPEC members such as Russia to agree swingeing production cuts to reduce the supply glut.

The unprecedented collaboration paid off, and by setting production targets and keeping to them, the oil producers stimulated a rally that lasted until the start of October 2018.

Last June, producers decided to change the methodology for setting production targets in order to allow Russia and Saudi Arabia to make up the expected shortfall in Iranian output following the US decision to re-impose sanctions against Iran.

But Moscow and Riyadh may have been too quick off the mark.

At the last moment, the United States agreed exemptions at higher levels than the markets had been expecting.

That has sent prices into a tailspin over the past two months, a drop that effectively wiped out the gains so painstakingly achieved since the beginning of 2017.

It therefore remains to be seen whether the alliance will decide to cut output again and, if so, how the burden will be shared out.

Negotiations could be fraught, as some members resent the clout that Saudi Arabia wields in setting OPEC policy.

In a surprise move on Monday, Qatar -- which has been an OPEC member since 1961 -- said it would quit the cartel next month in order to focus on gas production.

While Doha accounts for only around two percent of OPEC output, Iran, the group's third-biggest producer, has accused Saudi Arabia of being in thrall to the United States.