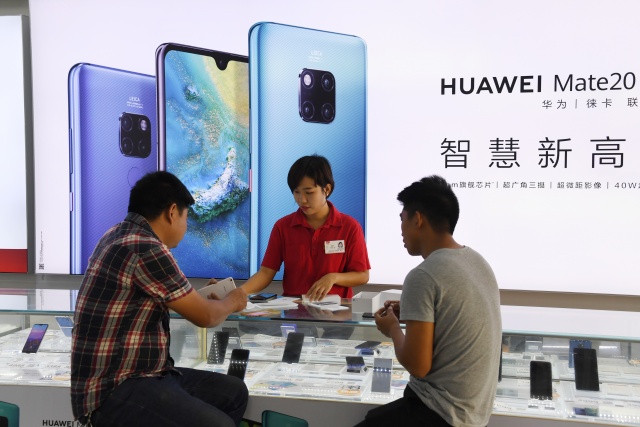 Customers are served at a Huawei stand in a store in Sanya on China's tropical Hainan Island on December 8, 2018. Chinese state-run media on December 7 condemned the arrest in Canada of a top executive of telecoms giant Huawei on a US extradition request as a "despicable rogue's approach" to contain Chinese high-tech ambitions.(Greg Baker / AFP)

(AFP) - China summoned the US ambassador on Sunday to protest the arrest of a top executive from telecom giant Huawei in Canada, as Washington's top trade negotiator rejected suggestions that the case could affect talks aimed at settling a trade war.

The arrest of Huawei's chief financial officer Meng Wanzhou has infuriated Beijing, which demanded Washington drop its extradition request, and stoked tensions during the trade war truce between China and the United States.

But with negotiations underway against a "hard deadline" of March 1 to settle the tariff dispute between the world's two biggest economies, US Trade Representative Robert Lighthizer said he did not expect the arrest to disrupt the talks.

Meng, the daughter of Huawei founder Ren Zhengfei, is in custody awaiting a Canadian court's decision on bail on Monday.

"Le Yucheng pointed out that the US side has seriously violated the legitimate rights and interests of Chinese citizens, and the nature of the violation is extremely bad," the foreign ministry said in a statement.

"The Chinese side firmly opposes this and strongly urges the United States to attach great importance to China's solemn and just position," it said.

China also urged the United States to "take immediate measures to correct wrong practices, and revoke the arrest warrant against the Chinese citizen."

The statement warned that Beijing would make an unspecified "further response" in light of the US actions.

In a case which shook investors and rattled the markets, Meng was arrested in Vancouver while changing planes on December 1, the same day that US President Donald Trump and Chinese leader Xi Jinping agreed to a truce in their trade battle and gave negotiators three months to find a compromise.

Although Trump last week tweeted that the talks would end after 90 days "unless extended," Lighthizer said on Sunday that March 1 is a firm deadline.

"When I talked to the president of the United States he's not talking about going beyond March," Lighthizer said on CBS's "Face the Nation."

He also said that Meng's arrest "shouldn't really have much of an impact" on the talks, although he conceded that the Chinese might see it that way.

"For us, it's unrelated" to trade policy matters. "It's criminal justice."

The world's top two economies have exchanged steep tariffs on more than $300 billion in total two-way trade, locking them in a conflict that has begun to eat into profits.

Since taking office, Trump has waged an often-fierce offensive against Chinese trade practices, which he regularly brands as "unfair."

He sees the US trade deficit with China as a particular sore point, and the imbalance ballooned to a record $35.6 billion in November, official data showed on Saturday.

Analysts say Meng could become a bargaining chip in the negotiations.

In a bail hearing that was adjourned on Friday, Canadian Crown prosecutor John Gibb-Carsley asked for bail to be denied, saying Meng has been accused of "conspiracy to defraud multiple financial institutions."

He said if convicted, she faces more than 30 years in prison.

The extradition process could take months, even years, if appeals are made in the case.

Canada has a long-standing extradition treaty with the United States, requiring it to cooperate with US Department of Justice requests to hand over suspects.

Prime Minister Justin Trudeau has said politics played no part in the decision to arrest Meng.

Huawei said Friday that it would "continue to follow the bail hearing", expressing "every confidence that the Canadian and US legal systems will reach the right conclusion."

Huawei has denied any ties to the Chinese government, but many in Washington and other Western capitals are sceptical and have raised security concerns.

US federal law already bans military and government use of devices made by Huawei and fellow Chinese firm ZTE.

Influential Republican Senator Marco Rubio told "Face the Nation" that he plans to reintroduce legislation that would ban companies like Huawei from doing business in the US because they "pose a threat to our national interests."

General » Be a reporter: Write and send your article » Subscribe for news alert
Tags: China, US, Canada, diplomacy, telecom, Huawei