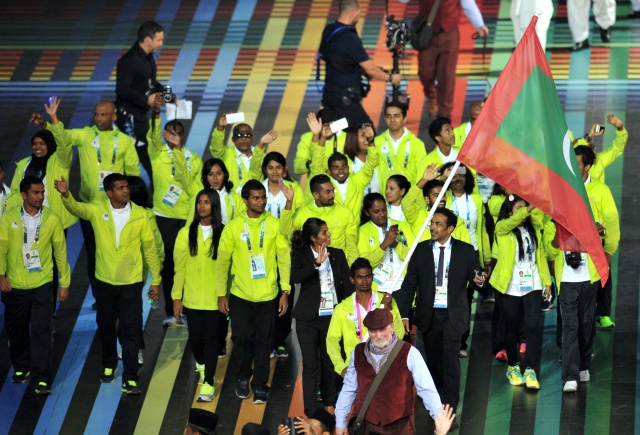 Maldives flagbearer Hassan Saaid leads the delegation during the opening ceremony of the 2014 Commonwealth Games at Celtic Park in Glasgow on July 23, 2014. (AFP PHOTO/ GLYN KIRK)

(AFP) - The Maldives has applied to rejoin the Commonwealth, reversing a policy of isolation under autocratic leader Abdulla Yameen who suffered a shock defeat in September.

His successor, Ibrahim Mohamed Solih, wrote to the 53-member bloc on Friday seeking readmission two years after Yameen pulled the atoll nation out of it, the president's office said Sunday.

Yameen withdrew the Maldives, an archipelago of 340,000 Sunni Muslims, from the Commonwealth after it mounted pressure on him to protect human rights and ensure the rule of law amid a ferocious crackdown on dissent.

Solih's office said the new president's administration believed in the values of the bloc, which consists mainly of former territories and colonies of the British empire.

"The Maldives' interest in re-joining the Commonwealth stems from a deep conviction that the values and principles enshrined in the Commonwealth Charter are more vital than ever," the president's office said in a statement.

The 54-year-old took office last month after winning a landslide election victory despite Yameen waging a crackdown on his political rivals and jailing most of the opposition.

During Yameen's reign, the United States had repeatedly warned democracy was under serious threat in the strategically-located archipelago sitting on key international shipping lanes.

Since Solih's election, political prisoners have been freed and opposition figures in exile have returned home.

Solih has warned of a "dire" economic crisis in the Maldives and asked regional power India for help. Yameen had drifted closer to China and the Maldives saw its foreign debt balloon under his leadership.