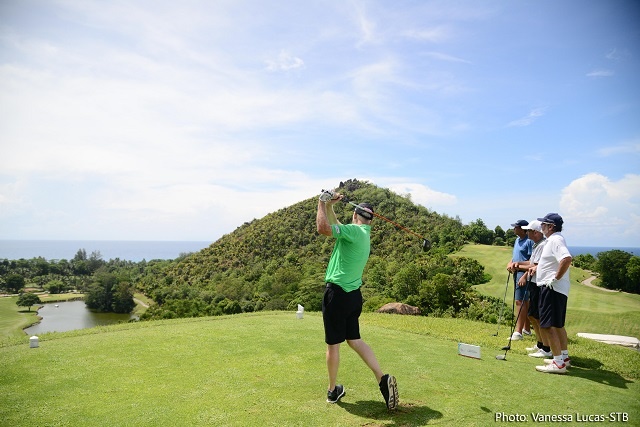 The Seychelles segment of the tour is taking place at the 18-hole golf course of the Constance Lémuria Resort. (Vanessa Lucas, Seychelles Tourism Board)

(Seychelles News Agency) - Seychelles is hosting its first major international golf tournament from December 14 to 16 at the golf course at Constance Lemuria Resort on Praslin, the second-most populated island.

The event is the second stage of the Mauritius Commercial Bank (MCB) Staysure Tour Indian Ocean Swing, which started at the Constance Belle Mare Plage in Mauritius. Around 32 of the world’s best golfers of the 2018 season are participating.

The celebrity golf players landed in Seychelles on Tuesday after an intense three-day competition in Mauritius that ended on Sunday.

Speaking at the reception ceremony at the airport, the chief executive of the Seychelles Tourism Board, Sherin Francis said, “It is an immense pleasure for me to see that all the efforts put in have concretised to such a beautiful moment. STB keeps marketing Seychelles as a polyvalent destination and having another international event on our calendar of events gives us that extra visibility. The event is going to be seen on very many sports channel and this is valuable publicity.”

The first tour of the Indian Ocean Swing in Mauritius culminated with the American professional golfer Dennis Clark finishing on top of the podium for now followed closely by Atlevi Magnus of Sweden.

The Seychelles segment of the tour is taking place at the 18-hole golf course of the Constance Lémuria Resort. The course built in 2002 by architect Rodney Wright has also won multiple World Travel Awards as Seychelles Leading Golf Resort and the Indian Ocean leading Golf Resort since its opening.

With the course covering about three-quarters of Constance Lémuria’s property, the resort has 18 staff, whose job is to maintain the par-70, 18-hole golf course.

Bruno Le Gac, the resort’s general manager, said that the staff responsible for the golf club “has been working extremely hard to ensure that we are ready for this prestigious international event, and they can be proud of what has been achieved so far.”

Leading up to the final tour of the MCB-Staysure 2018 Tour Season, which starts on Friday, Gary Pouponneau, the golf director, said that security would tighten within the resort during the tournament.

“Badges will be provided to people with a classification of access areas for people attending and participating,” said Pouponneau.

Constance Lémuria is offering participants in the MCB-Staysure tournament a ‘Hole in One’ prize in the 15th tee for any pro achieving a hole in one during the competition.

Mauritius Commercial Bank  Group – the sponsor of the Staysure Tour Indian Ocean -- has signed a three-year agreement incorporating a new two-stage Final Series which will draw a close to the Staysure Tour season until 2020.

At the first stage of the tour in Mauritius, Raoul Gufflet, the Deputy CEO of MCB, said, “The addition of Seychelles as the climax of the season, and the creation of the Indian Ocean Swing, makes us not only proud but really excited to have our clients, those of Staysure and the regular clients of Constance Hotels & Resorts, discover the incredible landscapes of the golf courses and resorts of Mauritius and Seychelles.”

The Staysure Tour, formerly known as the European Senior Tour, is the men’s professional golf tour for members aged 50 and older.