North Korea warns on US sanctions 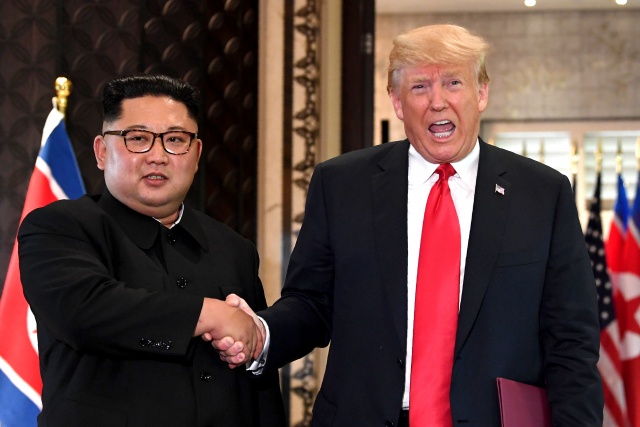 (FILES) In this file photo taken on June 12, 2018, US President Donald Trump (R) and North Korea's leader Kim Jong Un shake hands following a signing ceremony during their historic US-North Korea summit, at the Capella Hotel on Sentosa island in Singapore.
North Korea has condemned the United States over its latest sanctions measures, warning the policy could "block the path to denuclearization on the Korean peninsula forever". The warning from the North on Sunday, December 16, 2018 came days after the US said it was imposing sanctions on three senior North Korean officials over human rights abuses. (SAUL LOEB / AFP)

After a rapid diplomatic rapprochement this year that culminated in the Singapore summit in June between North Korean leader Kim Jong Un and US President Donald Trump, progress has stalled in talks on Pyongyang's nuclear arsenal.

In Singapore the two men signed a vaguely-worded statement on denuclearisation, but have since disagreed on what it means.

Now Pyongyang is demanding sanctions relief and condemning US insistence on its nuclear disarmament as "gangster-like", while Washington is pushing to maintain the measures against the North until its "final, fully verified denuclearisation".

Washington last week added three senior North Korean officials to those subject to sanctions over human rights abuses, including Choe Ryong Hae, who has been considered a right-hand man to Kim.

In a statement carried by the official KCNA news agency, the North said Trump had repeatedly expressed his desire to improve relations with Pyongyang, but the US State Department was "bent on bringing the DPRK-US relations back to the status of last year which was marked by exchanges of fire".

DPRK is the acronym for the North's official name.

In recent months high-ranking US politicians including Secretary of State Mike Pompeo had "almost every day slandered the DPRK out of sheer malice", added the Sunday statement by the policy research director of the foreign ministry's Institute for American Studies.

Using sanctions and pressure "to drive us into giving up nuclear weapons" would be the "greatest miscalculation", it added, and would "block the path to denuclearisation on the Korean peninsula forever".

A second summit between Trump and Kim -- who exchanged personal insults and threats of war throughout 2017 -- is expected to be held next year, with the US leader facing criticism over the planned talks since North Korea has taken few concrete steps to abandon its nuclear and ballistic missile programmes.

Pyongyang has long said it needs the weapons to deter a possible US invasion, and has spent decades developing them, at a heavy cost in both resources and the imposition of multiple sets of UN, US, EU and other sanctions.

But on Monday its nuclear assets were conspicuous by their explicit absence from coverage of the seventh anniversary of the death of Kim's father and predecessor Kim Jong Il, on whose watch Pyongyang carried out its first two nuclear tests.

Alongside extensive coverage of commemorative events across the country, the Rodong Sinmun newspaper, the mouthpiece of the ruling Workers' Party, published a lengthy editorial lauding Kim Jong Il's efforts to secure a "firm military assurance for peace and prosperity".

Its front page was dominated by a large picture of soldiers and officials including Kim paying their respects at his father's mausoleum, a sprawling palace on the outskirts of the capital.

It was the leader's first public activity in two weeks after visiting a shoe factory in Wonsan earlier this month.

Trump played down hopes Friday for any imminent deal to persuade Pyongyang to give up its nuclear arsenal but he also expressed optimism, saying North Korea's economy has "wonderful potential" and that Kim "sees it better than anyone and will fully take advantage of it for his people".

In actions required by Congress, his administration said last week it would seize any US assets of the three officials for suppressing freedom of speech.

Such restrictions may have little effect on individuals in one of the world's most closed countries but have symbolic impact as North Korea seeks greater acceptance by the United States.

General » Be a reporter: Write and send your article » Subscribe for news alert
Tags: NKorea, US, nuclear