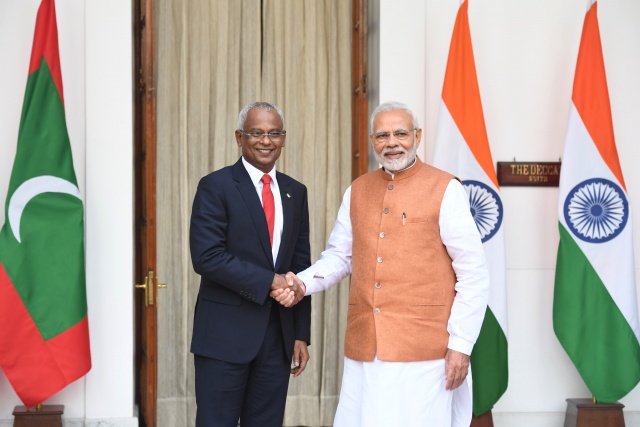 (AFP) - The new Maldives president, seen as closer to the West and India than his predecessor, secured $1.4 billion from New Delhi on Monday in his first visit abroad to his country's "closest friend".

"India is our closest neighbour and our people are bound by ties of friendship and cultural affinity," Solih told reporters.

"Within those close links, trade and commerce have flourished. India is not only our closest friend, it's also one of our largest trading partners," Solih said.

The package of financial assistance is in the form of budgetary support, currency swap agreements and credit lines, Modi said, after what he called "successful talks" to build upon the two countries' "deep-rooted" friendship.

"We want greater trade ties with Maldives. There are increasing opportunities for Indian companies in the island nation. This is beneficial for both the countries," Modi said.

"Our security interests are interlinked. We will not allow our countries to be used for harmful activities against each other," he said.

Solih, 54, unexpectedly beat his predecessor Abdulla Yameen to the presidency of the Indian Ocean archipelago and upmarket honeymoon destination in elections in September.

Besides being accused by critics of corruption and muzzling the media, Yameen was seen as close to China, borrowing from Beijing for infrastructure projects including a new bridge and an airport expansion.

China has also loaned billions to other countries around the Indian Ocean and beyond, stoking fears of a debt trap and riling both India -- which has traditionally held sway in the region -- and the United States.

Solih's party has called for a review of the projects bankrolled by China in the strategically placed Indian Ocean country.

Former president Mohamed Nasheed, now Solih's mentor, has accused China of a land grab and condemned a free-trade agreement signed by Beijing and Yameen as one-sided.

Nasheed told AFP in a recent interview that it would be "very difficult" for the Maldives to repay its Chinese debt, which he said was estimated to be at least $3 billion.

But China's ambassador told the local Avas.mv website last month that only about half of the Maldives' external debt pile of $1.2 billion was owed to Beijing.

"We have nothing to gain if a friendly country falls into debt," he said. "There is no single (piece of) evidence to support the so-called debt trap claim."