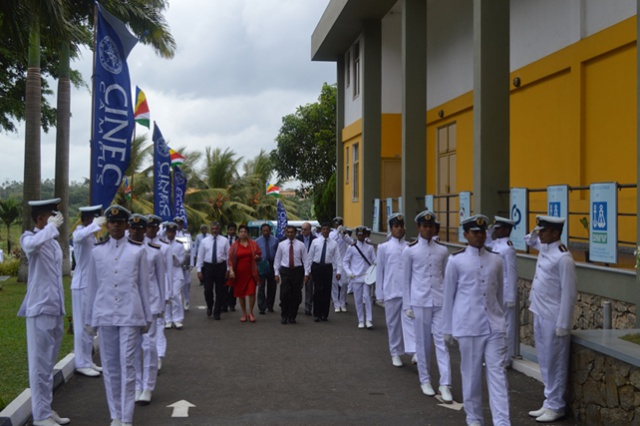 The 19 students are now undergoing a three month pre-sea training at the prestigious Sri Lankan maritime college. Seychelles education minister Macsuzy Mondon revealed this, last week during Cinec’s graduation ceremony in Sri Lanka. The minister who was flanked by Seychelles Petroleum Company (SEYPEC) chief executive Conrad Benoiton was the guest of honour at the graduation ceremony.

“Through this partnership with Cinec the status of the Maritime Training Centre of Seychelles is being enhanced and we hope that it will emerge as an important maritime training centre in the region.” Mondon said during the ceremony.

According to Mondon the ministry expects to fill the skills gaps in the entire maritime sector soon. Mondon says that Cinec assisted the Seychelles Maritime Safety Administration (SMSA) to be awarded international recognition by being listed on the White List of the International Maritime Organisation (IMO).

The 19 students are now closer to joining a maritime career in either Seypec tankers, Seychelles Coastguards, maritime conservation, tourism, merchant shipping or even semi-industrial fishing.

Future of the Blue Economy rests in hands of young seafarers

The training of qualified seafarers might stir the maritime sector positively coming at a time when the fisheries industry has experienced soaring consumer prices necessitated by declining supplies. ISPC Seychelles the main wholesale company for the hospitality sector in the archipelago attributes this scenario to the declining of manpower in the fisheries sector. “We have to do something to entice younger Seychellois to the fishing boats,” Alfred Fourcroy the chief executive of ISPC told SNA in an interview in June.

In August 2013 the education ministry signed a 3-year agreement with Cinec which saw the Malabe based institute assuming the management of the MTC. This was exactly one year after Seychelles President James Michel made a state visit to Sri Lanka and initiated the collaboration. In June 2012 Michel had inaugurated a new and revamped MTC campus at Providence on the east coast of Mahe.

The Cinec-led skills upgrading for the Seychelles nationals forms a critical component of the island nation’s maritime affairs which has become a key cornerstone of Michel’s administration. In the last five years he has been championing the Blue Economy concept and it has now become Seychelles main diplomatic agenda.

The Blue Economy which is anchored on sustainable exploitation and development of world’s oceanic resources was adopted by the 22nd Ordinary session of the African Union’s heads of state and government held in Addis Ababa early this year. According to Dr. Nkosazana Dhlamini-Zuma, Chairperson of the AU Commission, the blue economy will form a major chapter in Agenda2063 which is the continent’s development blueprint for the next 50 years. In June 2013 Dr. Zuma had initially visited Seychelles and held talks with President Michel on the blue economy which covers fisheries, climate change, hydrocarbons, maritime lanes and all oceanic resources.

During her 5-day working visit to Colombo, the Seychelles education minister also held talks with her education counterparts Bandula  Gunawardhana  and Banda Dissanayake who holds the higher education portfolio to explore future collaboration between Colombo's University of Vocational Technology and the Seychelles Institute of Technology (SIT).

Relations between Seychelles and Sri Lanka have grown in the last two years. Recently the Bank of Ceylon opened a branch in Seychelles capital of Victoria, and Minhin Lankan started flights to the islands last year. Sri Lanka’s President Mahinda Rajapaksa visited Seychelles in late June and opened the Sri Lankan High Commission in Seychelles. Seychelles plans to do the same in Sri Lanka later this year.