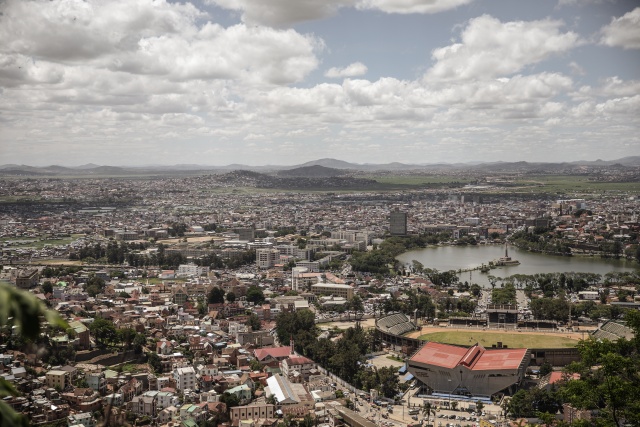 This picture taken on December 17, 2018, shows a general view of the capital of Madagascar, Antananarivo. Two former presidents of Madagascar, Andry Rajoelina and Marc Ravalomanana, will face each other in a run-off election to decide who will lead the Indian Ocean island nation.(GIANLUIGI GUERCIA / AFP)

(AFP) - Madagascans head to the ballot box on Wednesday in a run-off election between two rivals who have waited years to come face-to-face in a fiercely personal battle for power in the Indian Ocean island.

The clash between Marc Ravalomanana and Andry Rajoelina could revive instability in the impoverished country if the result is rejected by the losing candidate or fraud allegations are widespread, analysts warn.

The two contenders came a close first and second, far ahead of their competitors, in the preliminary vote in November.

Ravalomanana and Rajoelina were both banned from running in the 2013 vote as part of an agreement to end recurring crises that have rocked Madagascar since independence from France in 1960.

In the first round, Rajoelina won 39 percent compared with 35 percent for Ravalomanana. Both camps alleged they were victims of fraud and cheating.

Ravalomanana, 69, was first elected as president in 2002 but was forced to resign seven years later by violent demonstrations supported by Rajoelina, the then mayor of the capital Antananarivo. Rajoelina, 44, was installed by the army and ruled until 2014.

"There are fake ID cards and fake voter cards circulating right now... if the interior ministry does not do anything, there will be problems," Ravalomanana said in the candidates' TV debate on Monday night.

"I will work and do anything to make Madagascar a developed country," he pledged, underlining his experience and character in contrast to the younger Rajoelina.

Rajoelina used the debate to strike an authoritative tone, saying he would unite the country and vowing to respect the result.

"Let us agree that it is the choice of the Madagascan people who will lead the country," he said, adding he would "be the president of everyone, from north to south and from east to west."

About 45 percent of the 10 million registered voters abstained from the first round, and the two surviving contenders criss-crossed the country via helicopter as they pulled out all the stops to secure votes on Wednesday.

Both candidates have spent lavishly on campaigning, with promises and handouts distributed liberally to voters who are among the poorest in Africa.

With the personalities of the two contenders dominating the election, issues such as poverty, corruption and lack of basic services have been largely pushed to one side.

Some analysts warn the election fall-out could further damage the country's chances of development.

"We have two egos face-to-face who do not see themselves losing and who could go on until breaking point, especially if the results are very tight," said Sahonda Rabenarivo, of the Observatory of Political Life in Madagascar (Sefafi).

Former education minister Paul Rabary, a fringe candidate who was eliminated in the first round, said the stakes were high.

"For Marc Ravalomanana, his network cannot survive if he does not take power. For Rajoelina, his personal history is sullied by the (2009) coup, so he must win to rescue his honour."

Ravalomanana is a former milkman from a peasant family who went on to build a business empire, while Rajoelina is a former party planner and successful entrepreneur with slick communication skills.

Madagascar is well known for its vanilla and precious redwood, yet is one of the world's poorest countries, according to World Bank data, with 76 percent of people living in extreme poverty.

Outgoing president Hery Rajaonarimampianina was eliminated in the first round after collecting just 8.82 percent.