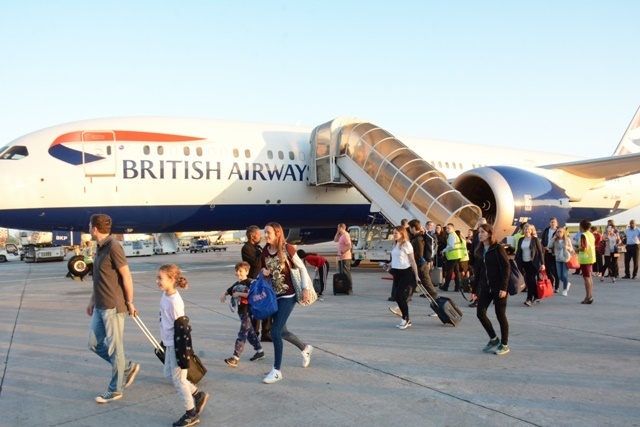 Europe remained the strongest region throughout 2018, with a growth of eight percent attributed to an increase in direct flights. (Joena Bonnelame)

(Seychelles News Agency) - Seychelles in 2018 saw a three-percent increase in tourism arrivals, which -- although lower than last year’s increase -- helped the industry to a 15 percent rise in revenue, said a top official of the tourism board.

The Central Bank of Seychelles recorded an equivalent of over $520 million (SCR7.1 billion) in earnings from the tourism industry. From the start of the year to December 9, Seychelles has welcomed 334,719 visitors to its shores.

“Finding ways to get more out of our tourists, and as such increase the overall tourism spends, remains the main priority for STB,” said Sherin Francis, the chief executive of the Seychelles Tourism Board.

Francis made the statements during the board’s end-of-year marketing meeting with partners and overseas offices at the Savoy Resort and Spa, Beau Vallon on Tuesday.

Europe remained the strongest region throughout 2018, with a growth of eight percent. This region received the largest chunk of resources from the tourism board and one of the major contributing factors to the success has been the excellent air connectivity between Seychelles and Europe. The addition of Edelweiss, Joon and British Airways on routes to Seychelles has added to the increase in visibility of the 115-island archipelago in the western Indian Ocean.

Germany remains the leading market with over 56,000 visitors representing an 18 percent increase compared to the same period last year.

STB’s director for Germany, Switzerland and Austria, Edith Hunzinger, last year predicted a 10 percent increase for the market in 2018. She said that the 18 percent increase has surpassed her expectation.

“Since 2014, we started a new strategy where we went back to attending public exhibitions. The concept is to look for consumers before we go to trade partners. Germany is already a mature enough market and we want the consumers to have already decided that they are going to Seychelles before going to their tour operators,” said Hunzinger.

For 2019, Hunzinger said that her office will pay more attention to Switzerland and Austria so as to increase arrivals from these countries.

“This is achievable with more training given to the travel agencies and coverage by the media,” said Hunzinger.

The other two leading markets are France in second place and the UK and the Northern Ireland in third place.

For the tourism board high on its list of priorities is digital marketing and Francis said, “this is increasingly the way the planet is conducting business and we must ensure that we remain ahead of the curve.”

Another contributor to the three percent increase is the high-profile sporting events held in the country. This year, Seychelles hosted the Eco-Friendly Marathon, the FINA open water swimming competition and the MCB Staysure golf tournament held for the first time in Seychelles.

Also impacting the year’s results are markets that are underperforming such as South Africa, the Middle East, China and Russia.

“In the middle of the year, Air Seychelles underwent restructuration and unfortunately they removed the Airbus from the route which flew two times per week to South Africa. This means that 500 seats were removed from this route each week, resulting in a decreasing number of seats for the tour operators to sell,” said Germain.

The unattractive airfares combined with a lack of flexibility from the partners in offering packages and special promotions resulted in a drop of 19 percent in the performance of the Middle East market.

For 2019, the department of tourism will start the ‘Seychelles Secret’ project where small establishments with 15 and fewer rooms will be ranked as Seychelles Secrets Bronze, Silver and Gold.

“Hopefully these establishments will be backed by a booking platform which we would open to local operators to participate at the relevant time,” said Francis.

Tourism » Be a reporter: Write and send your article » Subscribe for news alert
Tags: Central Bank of Seychelles, Seychelles Tourism Board