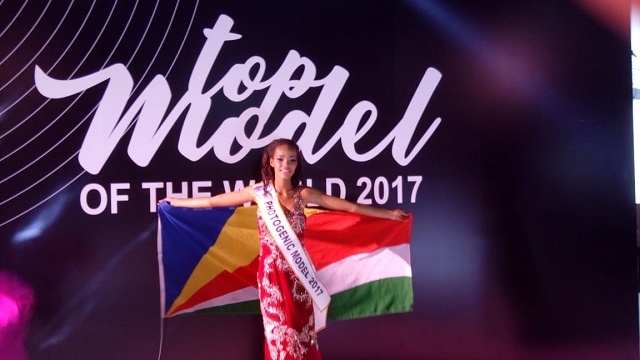 King is not new to pageantry, she won the photogenic title in the Top Model of the World pageant in 2017. (Naomy King)

(Seychelles News Agency) - A beauty queen from Seychelles, Naomy King, will be one of over 85 participants to compete for the Miss Intercontinental title in 2019 in Manila, Philippines.

King told reporters that she is honoured to be representing her country and knows that it is a huge responsibility. And she asked for support.

“I'm counting on the online votes of my compatriots to brave this competition,” said King.

Miss Intercontinental is an internationally recognised pageant which began in 1971 as a tourism event in the island of Aruba. Today it has become the showcase for the world´s most poised and stunning women competing for the crown worth $360,000.

King is not new to pageantry. In 2017 she took part in the Top Model of the World pageant that took place in El Gourna, Egypt in July. She won the photogenic title and was ranked fourth at the end of the pageant.

She said that winning the title Miss Photogenic at the Top Model was life-changing.

"Winning such a title and making my country proud was a great honour. The experience has made me into what I am now and has helped build up my self-confidence," said King.

Preparing King for the competition is Joelle Fabre, who owns Coral Modelling Agency, where King models.

Fabre said that there is a funny story in how she met King.

“I saw Naomy on a bus stop and was immediately attracted to her natural beauty. I asked her if she did not want to be a model and after a few meetings with her and the parents, we embarked on a very beautiful adventure in the world of fashion,” said Fabre.

“From thread to needle, Naomy has distinguished herself by her maturity, loyalty and discipline. For me it is the next Top Model of the Indian Ocean," added Fabre.

The 18-year-old did not participate in last year’s Miss Intercontinental competition last year due to school commitments. After completing her exams this year, she felt that she had more time to dedicate to the pageant.

King said that modelling helps her as it boosts her confidence, stating that is a plus in the course she is following at the Seychelles Business Studies Academy. She will be doing her third year in Business Management next year.

It is the current beauty queen Veronica Salas Vallejo of Mexico who will be crowning the next Miss Intercontinental.

People » Be a reporter: Write and send your article » Subscribe for news alert
Tags: Miss Intercontinental, Top Model of the World