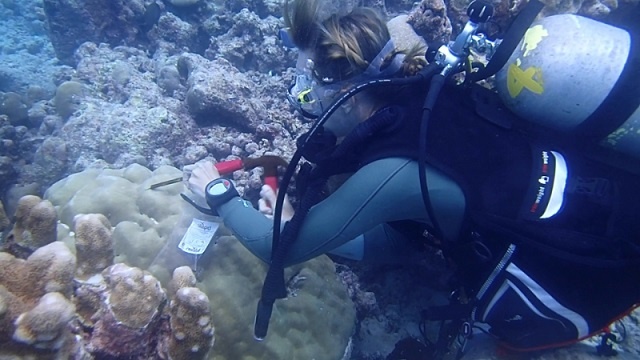 (Seychelles News Agency) - Mapping coral connectivity across the Seychelles and identifying keystone reefs supplying coral larvae to the region and are two components of a new project being undertaken by a British student at the University of Oxford in the United Kingdom.

April Burt, who worked as a project coordinator at the Seychelles Islands Foundation (SIF), is conducting the project as part of her PhD, an advanced degree that is awarded to people who have done deep research into a particular subject.

The project “involves simply taking a small section of the coral colony and storing it in ethanol until returning it to the labs in Oxford. Once in the lab, I will carry out genetic analysis,” Burt told SNA.

Burt said the research includes the collecting of a set of coral samples from as many reefs in Seychelles as possible. To date, she has collected samples from six sites near the granitic islands and she is currently collecting samples from the remote island of Aldabra, a UNESCO world heritage site.

“If we know which reefs are the most important ‘parent’ reefs then we can better understand how to allocate resources and protection where they will be most valuable. This is extremely important to inform effective management of Seychelles reefs, for which the Seychelles' blue economy relies on,” said Burt.

With an Exclusive Economic Zone of 1.4 million square kilometres, Seychelles, a group of 115 islands in the western Indian Ocean, relies largely on the resources coming from its surrounding waters. Fisheries is the second top contributor to the island nation’s economy.

Around 15 percent of the 95,000 Seychellois inhabitants are engaged in fishing and fishing-related activities, which makes the livelihood of corals an important factor.

Burt said the project "will help provide information on the current climate change impact on corals such as coral bleaching.”

Following the mass coral bleaching as a result of the El Niño phenomenon of 1998 several organisations have been very active in the protection of coral reefs. In 2010 Nature Seychelles -- a leading environmental conservation organisation -- embarked on the first large-scale coral restoration project called Reef Rescuers in Seychelles.

Burt said that this project is truly collaborative and that she has received tremendous help from a number of organisations to facilitate site visits and collections.

“I hope to continue collecting samples and I’m grateful for any assistance to ensure this study maximizes its usefulness to island management practitioners across Seychelles,” she said.