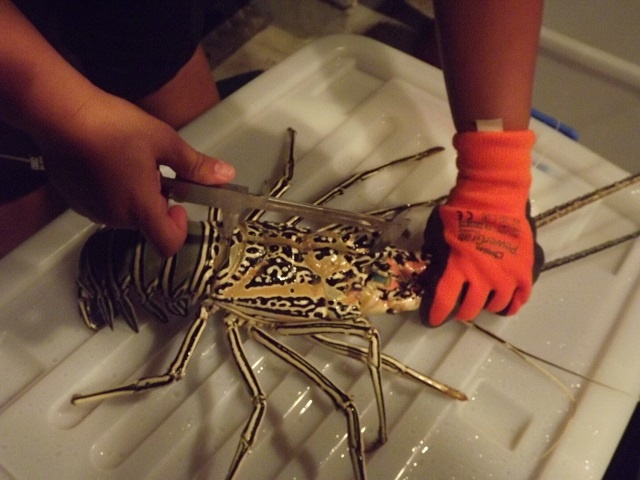 The lobster fishing season was last open in 2016/2017. (Ministry of Fisheries and Agriculture)

(Seychelles News Agency) - The lobster season will remain closed for 2018/2019 due to dwindling numbers in part because of illegal poaching of the sought after seafood delicacy.

Closing the season for a second consecutive year is seen as a necessary measure by the Ministry of Fisheries and Agriculture and the Seychelles Fisheries Authority (SFA) so as to allow the lobster stock to rebound.

“Poaching is an issue that we are becoming more concerned about as it is becoming more prominent. You even see people on social media posting lobsters for sale,” Rodney Govinden, the senior fisheries scientist at the fisheries authority told SNA on Thursday.

An individual caught illegally fishing for lobster during the closed season will be liable to prosecution and subjected to a fine of up to $735 (SCR 10,000). It is also illegal to sell, purchase and be in the possession of local lobsters.

“Members of the public are being encouraged to report any illegal activities by contacting SFA,” said Govinden.

To promote compliance, SFA will be mounting an awareness campaign to educate the public on the regulations that govern the fishing of lobster. People will be educated through different spots to be aired on television. The Monitoring Control and Surveillance section will also be carrying out regular patrols to deter such illegal activities.

When the season is open, fishing of lobster is carried out in a controlled manner, where the number of issued licenses is capped at 20. These are allocated to fishermen on a first-come, first served basis and the open season lasts for three months only -- December, January and February.

As customary, a fisheries-independent survey was carried out, where a total of 20 sites were monitored. Results of the survey showed that there was a decline in abundance and size of lobster, causing the relevant authority to close fishing for the 2017/2018 season.

These results were presented to relevant authorities and lobster fishermen in January.  It provided an opportunity to discuss issues regarding compliance to regulations and management of the fishery. One of such issues was the occurrence of undersized individuals in the catches and how to address it.

In October 2018 the annual lobster survey was carried out to assess the recovery of the stock.

A press release coming from the Ministry of Fisheries states that “results from the survey indicates that the overall abundance of lobsters has declined.”

This decline is attributed to a reduction in the abundance of juvenile lobsters, which is a cause of concern for the long-term sustainability of the resource. Encouraging signs of recovery have been observed by an increase in the abundance and biomass of large lobsters.

The fisheries authority will continue to monitor the status of the resource through its participatory lobster monitoring programme surveys. This will ensure the sustainability of the stock, allowing locals and visitors to enjoy fresh local lobsters for generations to come.

The next survey will be carried out in October 2019, after which decisions will be taken as to whether the season will reopen for 2019/2020.