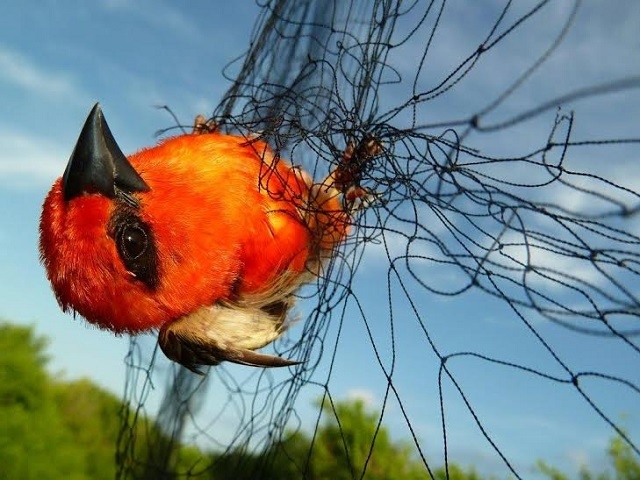 A Madagascar Fody in a mist net which was the first method of capture at the beginning of the eradication project on Aldabra. (Seychelles Islands Foundation)

(Seychelles News Agency) - Organisations in Seychelles working on various projects under the biodiversity programme of the Indian Ocean Commission (IOC) had the opportunity to showcase achievements and results in a recently organised workshop.

The IOC communication assistant, Mihary Randrianarivelo, told SNA that Seychelles has greatly benefited in terms of building its capacity and protecting its biodiversity.

“This is reflected in the results and achievements made by the different projects which have received funds from the Indian Ocean Commission. These include some coral restoration projects, the sea cucumber management plan, and the biosecurity programme on Aldabra,” said Randrianarivelo.

A total of $2.9 million has been disbursed under the programme to some non-governmental organisation and agencies involved in the protection of biodiversity resources in Seychelles, an archipelago in the western Indian Ocean.

Randrianarivelo said that it is still refreshing to see that Seychelles has taken a lot of initiatives to protect its biodiversity to ensure the survival of its population and the surrounding environment.

The Biodiversity Programme being implemented by the Indian Ocean Commission (IOC) is funded by the European Union. The programme’s aim is to strengthen national and regional capacities in managing coastal, marine and island-specific biodiversity resources and ecosystems to ensure their conservation and to promote the sustainable use of these resources for the benefit of the population.

The director of the biodiversity conservation section in the Ministry of Environment, Ashley Dias, told SNA that the different projects helped maintain the Seychelles' biodiversity.

Dias said that a typical example where Seychelles has benefited under the programme is the control of invasive alien species project on the remote Aldabra atoll, one of the island nation’s World Heritage sites.

The Seychelles Islands Foundation (SIF) which manages the atoll recently started a new project funded under the biodiversity programme of the Indian Ocean Commission. Although SIF has been able to eradicate key invasive alien species, to maintain the successful outcomes of these projects and ensure the protection of Aldabra it is essential to have strong biosecurity measures in place.

The Seychelles Fisheries Authority has also benefitted from the programme with funds that have helped developed the Support for adaptive co-management of sea cucumbers in the Seychelles (SEACUSEY) project. The project that was carried out from March 2017 to September 2018, aimed at improving sea cucumber fisheries resource management and governance in the Seychelles.

The chief fisheries scientist of the Seychelles Fisheries Authority, Rodney Govinden, said that the authority can now determine the biological and genetic information of the species that was not present before.

“We have been able to develop new tools to for data collection and an electronic logbook for fisherman. We have developed an app that can be used on any smartphone, to gather information about sea cucumber fishing as well,” said Govinden.

Sea cucumbers are marine animals with leathery skin and an elongated body containing a single, branched gonad found on the sea floor worldwide. They are so named due to their resemblance to the fruit of the cucumber plant and are consumed fresh or dried in various cuisines. Sea cucumbers are considered a delicacy in East and Southeast Asia.