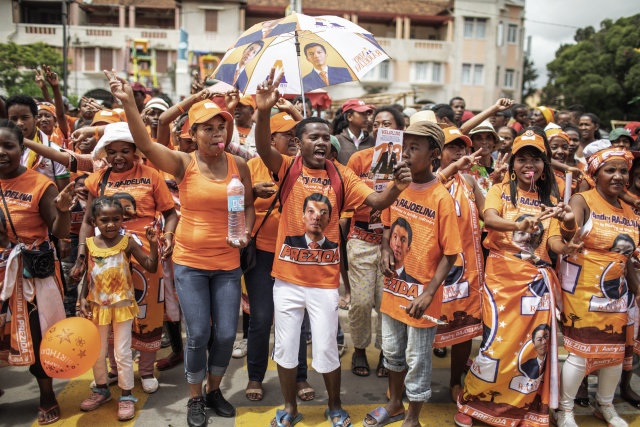 Supporters of Malagasy Presidential candidate Andry Rajoelina cheer during a rally on December 16, 2018 in Antananarivo, Madagascar, ahead of the run-off of presidential elections. (GIANLUIGI GUERCIA / AFP)

(AFP) - Former president Andry Rajoelina on Friday took an early lead in Madagascar's election count with a clear advantage over his rival Marc Ravalomanana, according to partial official results.

With about one-third of polling stations counted, Rajoelina had 54.85 percent of the vote and Ravalomanana had 45.15 percent after the head-to-head election on Wednesday.

Both camps have claimed victory and alleged fraud, raising fears of a disputed result and the risk of a new political crisis in the Indian Ocean island which has a history of coups and unrest.

Rajoelina and Ravalomanana, both former presidents and long-time rivals, are locked in a duel for power after they came a close first and second in the preliminary election in November.

With a turnout was about 47 percent, Rajoelina's early lead was still seen as inconclusive.

"I have noticed massive fraud. There are electoral cards that are fake," Ravalomanana told AFP on Thursday at his campaign headquarters in the capital Antananarivo.

"If the results follow the rules and take into account our complaints then yes, I agree (with the results), but if they don't follow the democratic process, no."

Rajoelina's upbeat campaign staff responded with their own accusations, saying they had detected "fraud" and "manipulation".

"We took a big step towards victory, the ballot boxes spoke once and for all," former minister Hajo Andrianainarivelo told AFP. "If they say they have found fraud, I urge them to use the remedies provided by law."

The two candidates were both banned from running in the 2013 election as part of an agreement to end recurring crises that have rocked Madagascar since independence from France in 1960.

Ravalomanana, 69, was first elected president in 2002 but was forced to resign seven years later by violent demonstrations supported by Rajoelina, the then mayor of the capital Antananarivo.

Complete results are due by January 9.

General » Be a reporter: Write and send your article » Subscribe for news alert
Tags: Madagascar, Vote