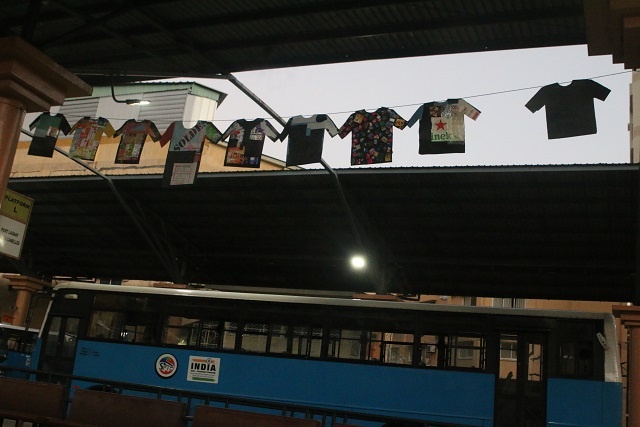 Art installations have been put on two of the three main islands as part of a national arts project – UP! Seychelles - implemented by the Seychelles Art Projects Foundation.

George Camille, the chairperson of the foundation, said local artists are using their works to spread messages concerning environmental sustainability.

According to Camille the UP! Seychelles project is about “the creation and installation of major public artworks including sculpture, installations, murals and video.”

So far three art installations and one mural painting were realised through the project. The latest was installed on Friday night at the bus terminal in the capital city of Victoria on Mahe – the main island.

“Through this piece, we are raising awareness on the danger of plastics,” explained artist Jude Ally. Ally adds that the installation is in the form of t-shirts carved from used cardboards, plastics were then glued over these.

Ally said that the area of the installation – at the busy bus terminal – is perfect for the messages being conveyed. “We use plastics; these are then in the environment. The plastics are then washed out to sea, the fish eats the plastics and then we eat the fish,” said Ally.

In addition, slogans accompanying the installation are calling for environment conservation and the need for each and everyone to be responsible and play their role to ensure environment protection.

Earlier in December, a colourful and attractive art installation entitled ‘La Digue Star’ was put up on the wall at La Passe near the jetty on the third most populated island of La Digue.

The installation was designed by Dylan Owen, who is an art teacher. “It consists of four starfishes, hand-made with plywood frames and decorated with recycled bottle tops and tins of various fizzy drinks,” said Owen. The discarded materials were found and collected mainly near beaches and on pathways all over the island of La Digue.

And as 2018 ends – the International Year of Reef (IYOR) – a mural was painted to commemorate the year.  Done in collaboration with Wise Oceans – a not for profit organization – the paintings depicting marine life was done on the wall of Ponte Larue Secondary School in the east of Mahe.

A statement from the foundation stated that “Seychelles is a nation with the ocean at its heart. In 2016, the islands experienced a coral bleaching event caused by prolonged increased sea temperatures, with 60% of monitored reefs in Seychelles recording high or extreme bleaching.”

As life in Seychelles relies heavily on coral reefs, the Ministry of Environment, Energy and Climate Change declared 2018 the IYOR in the island nation.

“Coral reefs are at great risk from increasing threats including climate change which poses the greatest threat to coral reefs globally. The Mural project is intended as a call for action - by doing everything you can to reduce your carbon footprint, conserving energy, not wasting water and eating less meat, you are directly helping to protect coral reefs for future generations,” said the statement.

All installations were done with the participation of the community especially school children. The project initiated in 2018 to deliver maximum exposure for educational and motivational messages mainly concerning the environmental sustainability in Seychelles – a group of 115 islands in the western Indian Ocean - is funded by the Global Environment Facility’ Small Grants Programme.