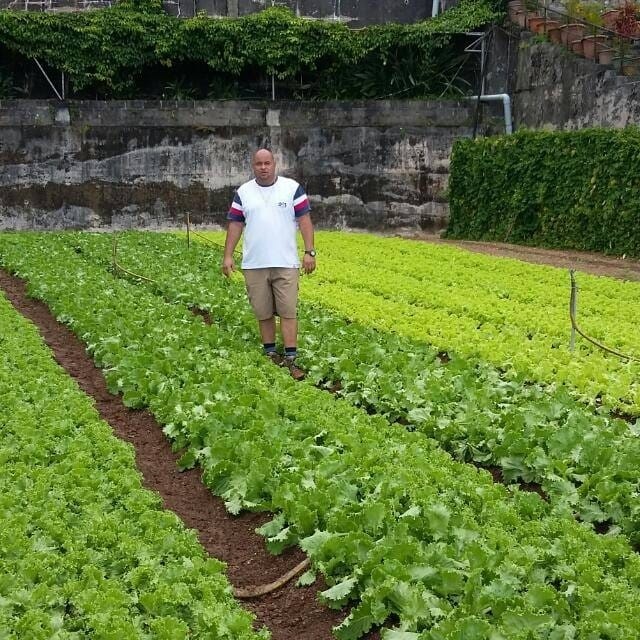 Morin is a full-time farmer and ventured fully into butchery eight years ago. (Rosie Damou)

(Seychelles News Agency) - Two farmers who have excelled during 2018 were awarded for their entrepreneurship during this year’s business awards organised by the Seychelles Chamber of Commerce and Industry (SCCI).

Jean-Pierre Morin won the award as the best entrepreneur whilst the young entrepreneur of the year was awarded to Nelson Renaud.

Morin and Renaud were amongst 30 entrepreneurs who won awards during the 7th annual business award held last Thursday evening at the Barbarons Avani Resort & Spa.

Morin is the owner of Rosebelle Farm and Rosebelle Meat Supply company and has been at the head of the company since it opened its first butcher shop in 2010. Morin is a full-time farmer and ventured fully into butchery eight years ago.

At his main Rosebelle butchery at Plaisance – on the east coast of Mahe, the main island of Seychelles – Morin told SNA that he credits his achievements to his late father Cherubin Morin – also a farmer, whom he said has taught him everything that he knows.

“I was born on a farm and agriculture is something I live and breathe. I began to work with my father during weekends and school holidays, and by 10, I was accompanying him to the market as early as 4 a.m. My father taught me at a very young age the value of working and above all working hard,” said Morin, who still wakes up at 4 a.m every day.

Morin said that the award is the accumulation of devotion, hard work and sacrifices he has made over the years, for the agricultural sector.

“Without hard work there is nothing. Every day I still have daily chores to attend to on the farm and this includes feeding of the pigs which I do daily,” explained Morin, who added that he tries every day to visit his retail outlets and participates actively in the butchery.

Since the creation of Rosebelle, Morin has opened four other outlets on Mahe and one on Praslin – the second most populated island. Two more Rosebelle shops are expected to open their doors in Anse Royale and Providence next year.

On his part, full of innovation and enthusiasm, Renaud is bringing innovation to his farm located at Anse a la Mouche in the South of Mahe. The 30-year-old resident of St Louis, a district on the outskirts of the capital city of Victoria, practices a mode of agriculture called permaculture which comprises of sustainable farming techniques.

“The objective of my business, ‘Permaculture Seychelles’, is to increase agricultural production in the country and this type of technique consists of a lot of innovation such as aquaponics,” said Renaud.

Renaud explained that “permaculture attempts to mimic nature in which traditional techniques are merged with modern engineering and technology in order to produce fresh, organic products.”

Although permaculture is not a well - known form of farming in Seychelles – a group of 115 islands in the western Indian Ocean, Renaud said his business has attracted a lot of attention particularly from various organisations in the region.

“They are going crazy over my project and hence Seychelles also had to recognise that there are youths leading the way for other young people to succeed. This is my objective,” said Renaud, who admits that he was not surprised when his name was called for the award.

Renaud explained that together with the Local Food Producers Association, he wants to push for the agriculture sector to become one which is organic, innovative and where different and modern technologies can be used.

“Agriculture is hard work, but we as farmers can work more smartly,” said Renaud who recently assisted the Perseverance Primary School to set up its aquaponics system becoming the first school to grow vegetables using this method.

During the 7th edition of the Seychelles business award, there was the presentation of the lifetime achievement award which went to the late Deenu Pillay whilst Kathleen Mason won the award for determined and driven female in the local business community.

The Secretary General of the SCCI said that the awards for this year were challenging as this was opened to all business, across the board.

“This year, we opened the process to the general public for the nomination process and we also had businesses presenting their own nominees,” explained Iouana Pillay. Pillay added that now people are more interested in the awards as winning such is an achievement.

“The business awards is a way to push the business sector to move forward and provide them with the opportunity to expose their services and let people know what they are all about,” said Pillay, who elaborated that next year more emphasis will be put on making the awards more transparent.

Winners of the award were chosen by a panel of independent judges.

New shipping, air routes being explored between India and Seychelles