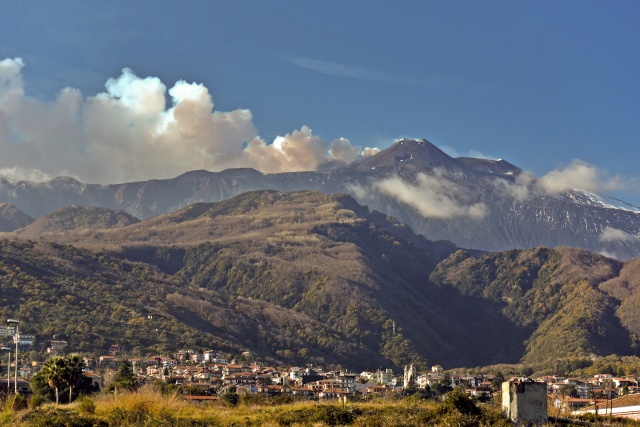 Smoke rises from Mount Etna over the city of Giarre, Catania, on December 26, 2018. A 4.8-magnitude earthquake struck on December 26 in the area near Europe's most active volcano Mount Etna, injuring several people, damaging buildings and forcing the partial closure of a highway, Italian civil protection authorities said.(GIOVANNI ISOLINO / AFP)

Two people were pulled from a collapsed building and around 10 were taken to hospital suffering light injuries from falling debris.

An elderly woman suffered multiple fractures, Agi news agency reported, while 18 people made it on their own to hospital to be treated for minor cuts and shock.

Around 600 inhabitants will be housed in emergency shelters provided by local authorities in the region, which comprises mainly small farm towns and vineyards.

Rescue services from Sicily and neighbouring Calabria were deployed to affected towns and villages.

The quake was the region's strongest since Mount Etna erupted on Monday, spewing ash and forcing the temporary closure of Sicilian airspace.

An airport at the city of Catania continued to operate and a coastal highway nearby was reopened late in the day after being partially shut down.

The quake's epicentre was located north of Catania, where several families spent the night in the streets.

The tremor toppled the belltower of the Santa Maria Santissima del Carmelo church in Acireale, including its statue of Saint Emidio, traditionally believed to protect against earthquakes.

Monday's eruption occurred on the side of Mount Etna, the first lateral eruption in a decade.

The INGV said it has recorded 60 tremors higher than 2.5 since then.

The most recent eruptions occurred in early 2017 and its last major eruption was in the northern hemisphere's winter of 2008-2009.

At the end of March, a study published in the Bulletin of Volcanology said Etna was slowly sliding towards the Mediterranean -- at a steady pace of 14 millimetres per year.

The INGV said the quake's epicentre was almost exactly where a 6.3-magnitude shock hit on February 20, 1818.

Italian authorities have now stepped up surveillance on the volcanic island of Stromboli, part of the Aeolian chain northeast of Sicily, which began spewing bits of lava on Tuesday.

General » Be a reporter: Write and send your article » Subscribe for news alert
Tags: Italy, earthquake