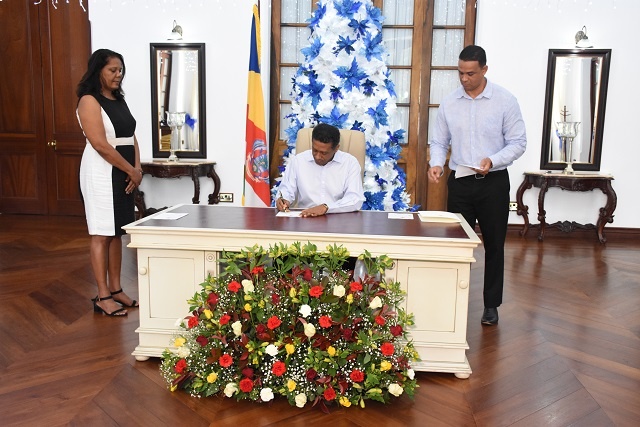 The amendment to the Elections Act was signed by President Faure on Thursday. (Jude Morel)

(Seychelles News Agency) - President Danny Faure of Seychelles has approved the amendment to the Elections Act which makes provision to employ a permanent chief electoral officer.

The chairperson of the Electoral Commission, Luciana Lagrenade, told reporters on Thursday that the amendment will ensure separation of powers between the board and the secretariat.

“The new chief electoral officer will be tasked with the responsibility to oversee the secretariat and all the administrative work related to it,” said Lagrenade.

The responsibilities of the chief electoral officer will include logistical preparation, providing appropriate training and ensuring there is adequate staff to work during an election.

According to the chairperson of the Electoral Commission, in the past elections, there has been a chief electoral officer who was appointed before an election.

“However, this has put a lot of pressure on the person discharging the responsibility due to a short amount of time to prepare all the logistics and everything that has to do with the election,” said Lagrenade.

The proposed amendments to the Election Act came out of electoral reform forum in late 2017. The Electoral Commission is mandated under Article 116 of the Constitution to undertake electoral reforms in Seychelles. The objective of the reform was to review the electoral legal framework in order to ensure the furtherance of democratic principles, effective representation and the creation of conditions that are conducive to fair electoral competition.

The post for the chief electoral officer will be advertised as of January 7 and once recruited will serve a mandate of three years in office.

Lagrenade said that applicants must be non-partisan and must have a first degree to apply.