US government shutdown extends into next week 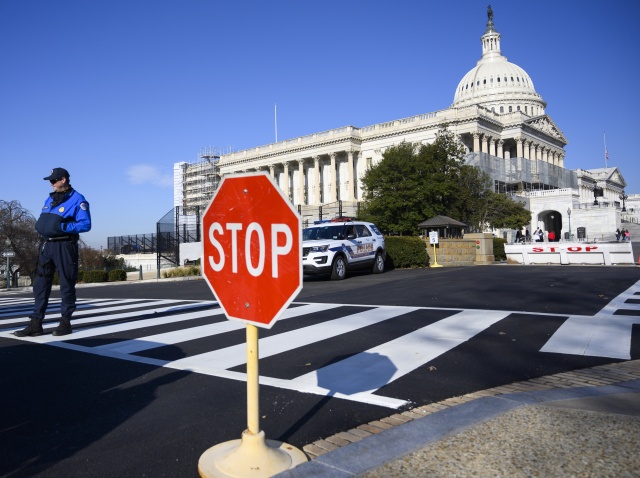 A police officer stands near the US Capitol during a government shutdown in Washington, DC, December 27, 2018. Congress members trickled back into Washington but there was little hope of ending the government shutdown sparked by a row with President Donald Trump over his demand for US-Mexico border wall construction. A lapse in funding to parts of the government meanwhile entered a sixth day. (ANDREW CABALLERO-REYNOLDS / AFP)

(AFP) - The US government partial shutdown was set to stretch deep into next week after legislators failed Thursday to make a breakthrough in the row over President Donald Trump's demand for a US-Mexico border wall.

After convening for just a few minutes following the official Christmas break, a still nearly empty Senate adjourned, deciding to renew budget deliberations only next Wednesday, the last day of the current Republican-controlled Congress.

That would take the government shutdown, already on its sixth day, into 12.

Both sides have dug in, with Democrats refusing to provide $5 billion for Trump's border wall project and the president insisting he will not fully fund the government unless he gets the money.

She said Trump "will not sign a proposal that does not first prioritize our country's safety and security."

As long as the wall debate holds up approval of a wider spending bill, about 800,000 federal employees are not getting salaries and non-essential parts of the government are unable to function.

Trump made clear he does not intend to give way first.

In a tweet Thursday, he once more accused Democrats of wanting to encourage illegal immigrants, "an Open Southern Border and the large scale crime that comes with such stupidity!"

"Need to stop Drugs, Human Trafficking, Gang Members & Criminals from coming into our Country," he said in another tweet, also lambasting "Democrat obstruction of the needed Wall."

Opponents, including some in his Republican party, accuse the president of exaggerating the danger from illegal immigration for his own political gain.

"No end in sight to the President's government shutdown," Dick Durbin, a senior Democratic senator, tweeted.

"He's taken our government hostage over his outrageous demand for a $5 billion border wall that would be both wasteful and ineffective."

Partial government shutdowns are not an unusual weapon in Washington budget negotiations, where party divides make cooperation a rarity.

But the rancor has spiraled under Trump's abrasive administration and is set to go even higher after January 3 when the Democrats take over the House of Representatives, following their midterm election victory.

The mess has contributed to worries over the outlook for the US economy in 2019, following a surging 2018 performance.

The stock market has plummeted in recent days, before a record recovery on Wednesday, under a variety of factors including Trump's barrage of criticism against the independent Federal Reserve.

Large sections of the nearly 2,000-mile (3,200 kilometer) border with Mexico are already divided by fences and other barriers.

But immigrants -- some fleeing danger and others just looking for jobs -- continue to cross illegally.

Trump's critics say that he is trampling over legally protected asylum rights and argue that resources should be channeled into higher-tech alternatives to a wall.

Managing the flow of illegal border crossers has been complicated by a shift from single men to more vulnerable families, including small children.

Two youngsters from Guatemala have died while in custody of US authorities this month and Homeland Security Secretary Kirstjen Nielsen said that "extraordinary protective measures" were required to handle the flow.

US Customs and Border Protection Commissioner Kevin McAleenan warned Wednesday that the agency was unable to cope with the thousands of arrivals, as most facilities were built decades ago for men arriving alone.

"We need help from Congress. We need to budget for medical care and mental health care for children in our facilities," he told CBS News.

General » Be a reporter: Write and send your article » Subscribe for news alert
Tags: US, politics, budget