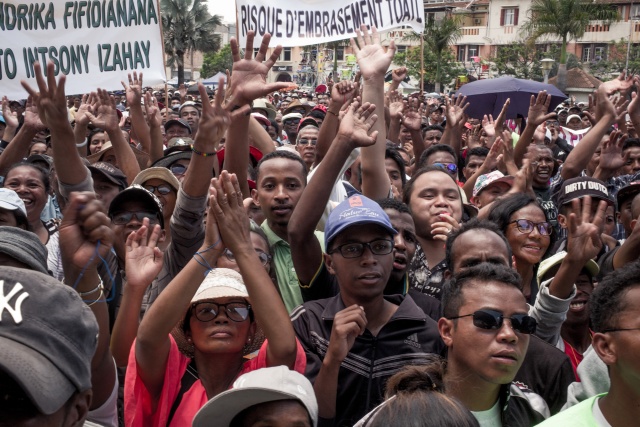 Supporters of the Malagasy opposition presidential candidate Marc Ravalomanana gesture and chant slogans during a rally at the 13 Mai Plaza, in Antananarivo, on December 29, 2018, to protest against the provisional results announced by the Independent National Electoral Commission (Commission Electorale Nationale Independante - CENI). (RIJASOLO / AFP)

(AFP) - Thousands of opposition supporters took to the streets in the capital of Madagascar on Saturday to protest against the victory of ex-president Andry Rajoelina in last week's elections.

Around 2,000 supporters of defeated candidate Marc Ravalomanana gathered in the May 13 Square in the heart of Antananarivo, demanding a recount of the vote in the Indian Ocean island state.

The protest, the first in a series of planned demonstrations, came as the country's top court reviews a petition filed by Ravalomanana challenging Rajoelina's win because of fraud allegations.

Opposition lawmaker Hanitra Razafimanantsoa, told the crowd gathered in the square that if there's a vote recount "you will find that our candidate Marc Ravalomanana won this election".

Supporters of Ravalomanana, who came second in the December 19 run-off, are planning to stage daily protests in the square, until the High Constitutional Court formally pronounces the winner.

"We will come here every day, from January 2, 2019", until the HCC finalises the case, vowed Razafimanantsoa.

The court has until January 7 to formally name the new president after it has reviewed the petition.

Early this year, hundreds of both Ravalomanana and Rajoelina's supporters occupied the same central square for weeks protesting electoral legislation which they had said was crafted to bar their candidates from participating in the elections.

The Constitutional Court ordered the then president Hery Rajaonarimampianina to form a government of national unity and to name a consensus prime minister in a bid to end the political crisis sparked by controversial electoral reforms.

Results published by the electoral commission on Thursday showed that Rajoelina had won 55.66 percent of the vote against 44.34 percent for Ravalomanana.

Ravalomanana immediately went to court challenge the results complaining about missing serial numbers on some ballots, among other allegations of fraud and irregularities.

In a statement on Friday, Ravalomanana's party alleged that "several hundred grave anomalies have been identified" and mentioning among other examples, ballot box stuffing and use of non-compliant voting materials.

It called on the people of Madagascar "to defend their choice and fight against fraud".

At the square, protesters held placards calling for the disqualification of Rajoelina and denouncing "corruption" and "fraud".

"Any electoral fraud is a serious crime" read one placard inscribed in red.

The two former presidents were both banned from running in a 2013 election as part of an agreement to end recurring crises that have rocked Madagascar since it gained independence from France in 1960.