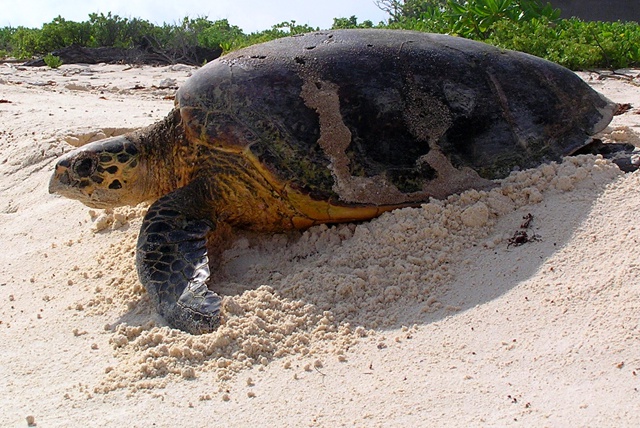 (Seychelles News Agency) - Although the ancient ancestors of sea turtles originally evolved on land, at some point around 150 million years ago, they decided to make a return to the water. But although the gentle reptiles need to breathe air to survive, that doesn’t mean they are not thoroughly at home in the ocean.

Researchers from the University of Swansea in the United Kingdom, Deakin University’s Centre for Integrative Ecology (CIE) in Australia and, Dr. Jeanne Mortimer the respected turtle conservation expert in the Seychelles have recorded what is believed to be the largest distance covered by a green turtle during migration.

The adventurous animal travelled an awe-inspiring 3,979 km in a single year, starting off in the remote central Indian Ocean Chagos archipelago and ending up off the western Indian coast of Somalia in East Africa.

According to the research article, which was published this week in the most recent issue of Conservation Biology, eight turtles were tagged with a GPS and aerial which was fixed to the top of their shells to pinpoint the turtles’ locations so as to monitor their movements and habits.

The aim of the study was to investigate the effectiveness of marine protected areas and ‘no-take’ zones and whether they actually help to protect endangered species such as the turtle to survive in the wild.

The results were concerning seven of the eight tracked turtles moved away from the 640,000 km² protected area of the Chagos Islands, where many turtles come to breed, and moved far outside the boundary in search of food after the breeding period had lapsed.

As lead researcher Professor Graeme Hays from Deakin University writes in The Conversation, the world’s existing marine parks may not be sufficient to safeguard the future of endangered migratory species such as the green turtle.

“The message from this research is that networks of small protected areas need to be developed alongside larger ones so species which migrate over long distances can stay in safe zones for as much time as possible,” Prof. Hays says. “Over the last few years, governments around the world have declared some massive marine parks, typically around ocean islands. How well these protect marine life has been heavily debated.”

While one of the turtles made the epic voyage of nearly 4,000 km to Somalia, two others swam 3,800km in the same direction towards the mainland of Africa and another made a 1,000 km journey northwards towards the islands of the Maldives.

Turtles are exposed to myriad dangers in the open oceans ranging from boat propellers, sea trash, poachers and fishing vessels which use nets that entangle turtles sometimes strangling them to death.

Green turtles are mostly vegetarians, living on a diet of algae and kelp when they reach maturity. Findings indicate that they live to a sprightly age of 80 and can grow up to 1.5m in length and weigh 300kg.

They can be found in tropical and subtropical waters, predominately in the Atlantic and Indo-Pacific oceans. However, during their long migrations they do not feed, relying instead on stored fat reserves. Similar-sized warm-blooded mammals, such as seals or dolphins, would be unable to complete such trips without starving to death.

Although the Marine Protected Area (MPA) of the Chagos Islands, set up recently in 2010, has a clear benefit to breeding and nesting turtles, Prof. Hays says that much more needs to be done to protect the species as it travels to and from these sites, a task that will require international cooperation to protect the network of migratory routes travelled by these great swimmers.

“This massive MPA is of value for green turtles, particularly as it protects them throughout the breeding season. But our work shows that even massive MPAs need to be supplemented with networks of smaller protected areas.” Prof. Hays says. He believes the results of the study could also apply to endangered and commercially exploited fish, such as sharks and tuna. “We hope that these results will now feed in to international conservation planning that is underway in the Indian Ocean and other ocean basins.”

Seychelles: a vital link in the turtle voyage route

The Seychelles-based researcher, Mortimer, who is an American-born marine biologist specialising in the conservation of turtles has lived in the Seychelles since 1981. Mortimer consults for the Seychelles environment and energy ministry and the Island Conservation Society of Seychelles (ICS).

Mortimer has been a member of the IUCN/Specialist Survival Commission specifically assigned to the Marine Turtle Specialist Group since 1979 and she has authored more than 125 publications and reports. SNA got in touch with her to discover more about her work with the turtles on the Chagos Islands and the link they have with the Seychelles.

Since 1996, Dr Mortimer has made four research trips to Chagos to study turtles, the most recent being a one-month visit in 2012 to work on the satellite tracking study with her peers Prof. Hays and Nicole Esteban.

Since 1992 Dr Mortimer and Prof. Hays have worked together on other, studies on Curieuse Island in Seychelles and Ascension Island in the South Atlantic Ocean.

The marine biologist pointed out that the findings of the study were particularly interesting in that of the eight post-nesting green turtles that were tracked from Diego Garcia in the Chagos islands, four of them were tracked to feeding grounds in the Seychelles. This is an astonishing 50 per cent of the turtles in the study which is a rare feat in marine scientific research.

“The Amirantes Bank seems to be a particularly important feeding area for green turtles from the entire western Indian Ocean,” she says.

Mortimer explained that her fascination for reptiles began as a little girl, and she became increasingly passionate about turtle conservation when she first started working with sea turtles in the Central American countries of Costa Rica and Nicaragua in the 1970s.

According to Mortimer green turtles, although very migratory, are not as common in Seychelles as they once were, the majority being found in the southern islands of the archipelago, especially at the Aldabra Atoll, where they nest the most abundantly.

“The worst danger they face in Seychelles is probably that of people who are still hunting them in some parts of the country,” cautions Dr Mortimer. “I think that Seychelles has been doing quite a good job protecting its sea turtles.  But, problems remain, and poaching is still a threat in certain areas, especially in the vicinity of Mahé, Praslin and La Digue.”

Dr Mortimer explained that the greatest long-term challenge facing the protection of sea turtles in Seychelles is the safeguarding of critical habitats—especially the beaches they nest on.

“But at islands where nesting turtles are well protected, their numbers have increased over the past decades. Those islands with the longest term protection such as Aldabra, Aride and Cousin Islands have shown the greatest increases in numbers of nesting turtles.” Dr Mortimer says.

Green turtles travel huge distances between their feeding sites and nesting sites, with mature turtles often returning to the exact beach from where they hatched. Where beaches are affected by human activity and settlement, female turtles may fail to nest, or if they do succeed, their eggs often become easy prey for both humans and other predators.

“It is very important for the government of Seychelles to set aside the most important nesting beaches as protected habitat,” said Dr Mortimer. “Fortunately, this issue is currently being addressed under several conservation projects underway with funding from the UN’s Global Environment Facility (GEF), The Nature Conservancy and others.”