4 frogs in Seychelles, including the world’s smallest 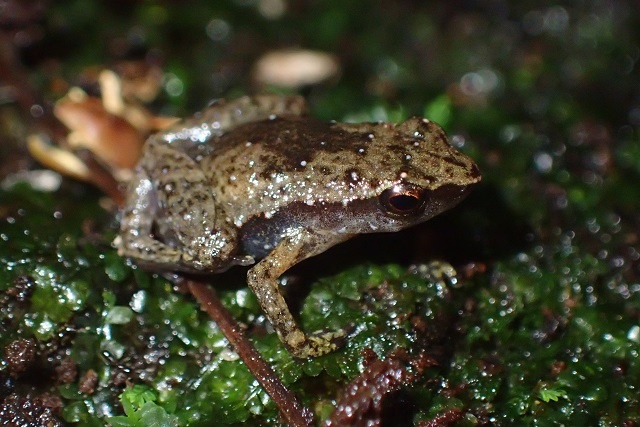 (Seychelles News Agency) - Seychelles is home to an endemic family of frogs called Sooglossids consisting of four species found only on the granitic islands. Due to the extended isolation of the species on a few granitic islands, these amphibians are globally significant and of high conservation value.

This is the third smallest frogs in the world, reaching a maximum length of 11 millimetres. Adult males are 8 millimetres long. The Gardiner’s frog is brown in colour and has a dark stripe running from its mouth to its legs. Newly hatched frog measure only 3mm in length. The species is notable for its ability to hear despite the absence of a middle ear cavity. Research has shown that the species is able to use its mouth cavity to amplify sound and transmit it to the inner ear.

This species is endemic to Silhouette, the third biggest island of Seychelles. The Seychelles palm frog lives in forests higher than 150 metres above sea level.  Most of the palm frogs are found in axils of the palm. The International Union for Conservation of Nature (IUCN) has reassessed the species in 2012 and concluded that the frog should be considered as "critically endangered" because of its small area of occupancy.

It is a species of frog found on the main island of Mahe, Praslin and Silhouette. The Seychelles frog lives on the floor of damp at altitudes from 150 to 991 metres above sea level. Higher altitude sites are considered to be more climatically stable and more suitable. The species is present in the Morne Seychellois National Park, Silhouette National Park and Praslin National Park.

The reproductive biology of this species is unusual. Eggs are laidon the ground and guarded until they hatch. The tadpoles are thereafter carried on one of their parent's backs.

This species is distinct from others due to the fact it has vomerine teeth which are small projections in the top of mouth that function in holding captured prey. The dorsal surface of the species is reddish-brown to golden. Legs and toes are banded with black bands lines and a thin yellow or white line travels dorsally down the back and along the back of the thighs.

In 1996, this species was listed as 'Endangered' but is now listed as 'vulnerable' on the IUCN red list because it is no longer considered as on a very high risk of extinction. It is thought to be threatened by habitat degradation, such as fire and invasive species. This species is also vulnerable to climate change.