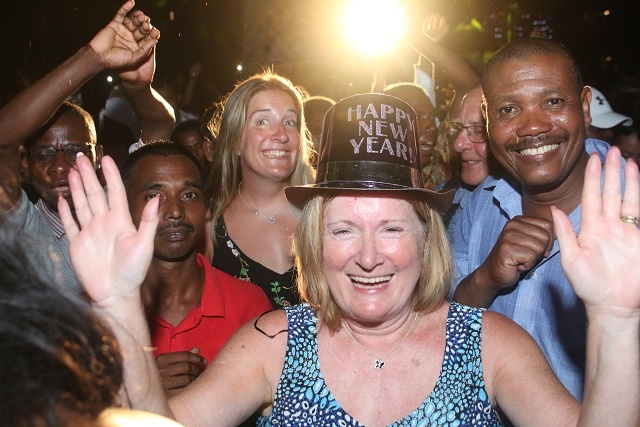 The street party was held in Francis Rachel Street in the capital city of Victoria. (Joe Laurence, Seychelles News Agency)

(Seychelles News Agency) - Hundreds of revelers converged in a loud street party in Victoria on Monday night to say goodbye to 2018 and to welcome the New Year.​

Seychellois bands and local artists provided live entertainment for the crowd. The highlight of the evening was the countdown to midnight and to 2019.  ​

As the clock tower — a smaller replica of the famous Big Ben of London —  struck midnight, church bells rang in unison and people in the streets exchanged warm New Year's wishes, with cheers, hugs and kisses - grateful to have made it to another year.​

The street party was held in Francis Rachel Street in the capital city of Victoria. By late in the afternoon the road was closed to allow organisers to make preparations.​

Basil Bouchereau – the organiser of the street party – said the event was a success. “The crowd was well entertained with bands like Saturn and well-known artists like Joseph Sinon, Stella Nibourette amongst others. It was a great ambience to welcome 2019.”​

The party in the normally quiet Victoria – the capital city of Seychelles, 115 islands in the western Indian Ocean - went on until 2am. ​

Keeping in the tradition of tranquility that Seychelles boasts as a tourism destination, most families of the island nation however chose to celebrate in a more private setting in family gatherings where food and drinks were in abundance and loud music played until the early hours.​

With a New Year promising a new beginning, many Seychellois partake in the tradition of making New Year’s resolutions.​
​
SNA spoke to people in the street to learn more about some of the changes people want to make in their lives and why. ​

Andrew Jeanne, 37, said that his wish for 2019 is to be in good health and to stick to his resolution. “Last year I promised myself to go on a strict diet, but was not able to do so. This year I am going to make an effort and will add a little exercise to it. I have other things on my list, but will take it one step at a time,” said Jeanne. ​

As for Yves Chetty, who is a police officer by profession, the New Year will be filled with positive things. He added that he aims to work harder next year to help maintain peace and unity in the country. ​
On a personnel note Chetty said that he is devoting “the New Year to Christ and wants to frequent the church more often.”   ​

Another resolution was to make the most of what life has to offer. Jeanne Auguste said that life is too short to just sit down and think. “My greatest resolution is to start living and worry less.”​