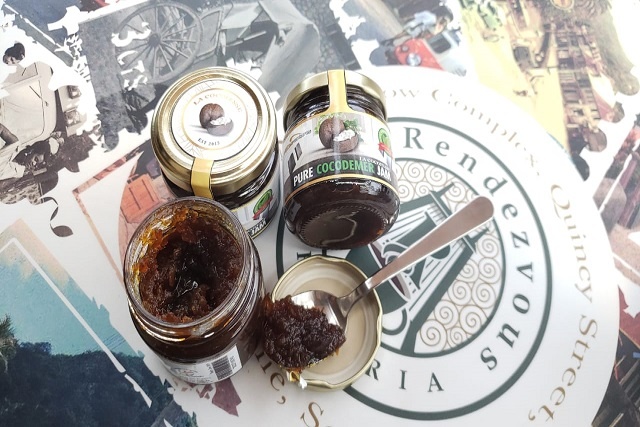 The jam is exclusively available at the newly opened Rendez Vous restaurant in the capital city of Victoria and at the Duty Free shop at the Seychelles International airport. (Salifa Karapetyang, Seychelles News Agency)

(Seychelles News Agency) - Looking for delightful, delicious jam? Then look no further as a new brand of jam made from the coco de mer kernel has just hit the Seychelles’ market.

Processed locally by Willow Ventures, the jam is the brainchild of Seychellois business partners Wilson Nancy, a civil engineer by profession, and David Low Yoke, who is self-employed. ​

“The idea of the jam was part of an obligation within our business plan that we tendered last year with the authorities. As part of our plan we had to produce other products with the coco de mer aside from using the nut to sell to tourists,” said Nancy. The kernel was also being exported to mostly Asian countries.​

Referring to the coco de mer, Nancy said “it is a unique natural treasure of Seychelles and using the byproducts here has always been a call made by the locals. Since coco de mer is a rare delicacy, we want the locals to have a taste of it.”​

The Lodoicea, commonly known as coco de mer, is the world’s biggest nut and is endemic to Seychelles – a group of islands in the western Indian Ocean. ​

The production of the jam comes after the government gave its approval for the exportation of the coco de mer kernel as a value-added product. ​

It was in the State of the Nation Address, in February 2017, that the President of the island nation, Danny Faure, announced a ban on the exportation of the unprocessed coco de mer kernel. The ban came into force in March.​
​Nancy said that the company will only be producing about a hundred jars per month. ​

The jam is exclusively available at the newly opened Rendez Vous restaurant in the capital city of Victoria and at the Duty Free shop at the Seychelles International airport. It costs $25. ​

“The raw material is of limited quantity and it is exclusive and authentic, therefore, we cannot afford to sell it everywhere,” said Nancy. ​

Nancy added that “the exportation of the dried kernels was the lazy approach when work could be provided to Seychellois to process the kernels with value added approaches to what we have been blessed with. We want to add value to it so that we can reap more benefits.” ​

By April this year, Nancy said that the company is planning to launch the first ever brandy made out of coco de mer. “The idea is to have as much product made of coco de mer which will be appreciated by the international market as well.”​

Willow Ventures is one of the three local companies whose application were chosen to process the kernel.​
The director general for biodiversity conservation and management at the Ministry for Energy, Environment and Climate Change, Marie-May Muzungaile, told SNA that the three companies -- Willow Ventures, Island Scent and Bill &Co Pty Ltd - were successful following a call for proposals in May 2017.​

“The proposals were the ones which the selection committee felt that had given more value to the coco de mer kernel,” said Muzungaile.​

Muzungaile said that two companies were already exporting the kernel before a ban was imposed, while the two others are new to the industry. “On top of that, they have come up with proposals which have research elements as well as the development of new products, in gastronomy and cosmetics amongst others​

Willow Ventures' which was set up in 2011, is involved in other businesses such as retail and construction. It owns a commercial fruit farm in the Takamaka district, in the southernmost part of the main island of Mahé.​