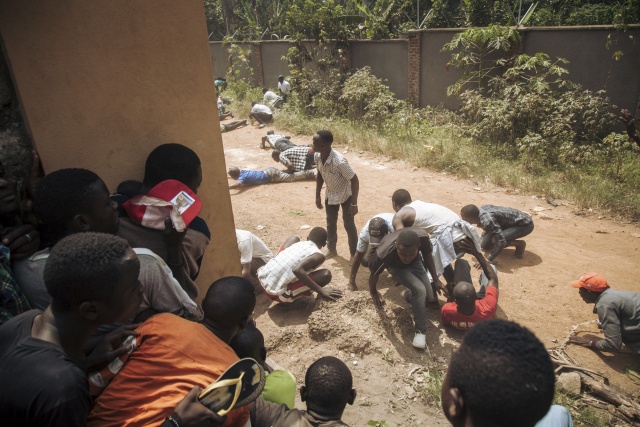 Protesters flee under FARDC military gunfire outside the offices of the electoral commission in Beni during a demonstration against the postponement of elections in Beni territory and the city of Butembo on December 27, 2018. (ALEXIS HUGUET / AFP)

(AFP) - The European Union called Friday for voting results in the Democratic Republic of Congo to reflect the people's will at what it called a "historic moment toward a democratic transition."

"The Democratic Republic of Congo is at a historic moment toward a democratic transition," a spokesperson for the EU's diplomatic arm said.

"The EU joins calls from the African Union election monitoring mission and the AU commission chairman, among others, to ensure the upcoming results conform with the Congolese people's vote," the statement said.

All of the DR Congo's "political actors have a duty to contribute to the success of this transition in a spirit of reconciliation and peace," the EU's external action service added.

African Union chief Moussa Faki Mahamat called earlier Friday for the DRC voting results to be respected, as tensions grow over delays in the counting process.

Three days before the elections, the EU lashed out at DR Congo's decision to expel its ambassador, calling the move "completely unjustified."

DR Congo Foreign Minister Leonard She Okitundu had told the EU it had 48 hours to withdraw its representative in retaliation for sanctions against 14 officials, including Kabila's handpicked candidate for the long-delayed vote.

The election was the country's first presidential ballot in seven years. It has not had a peaceful transfer of power since gaining independence from Belgium in 1960.