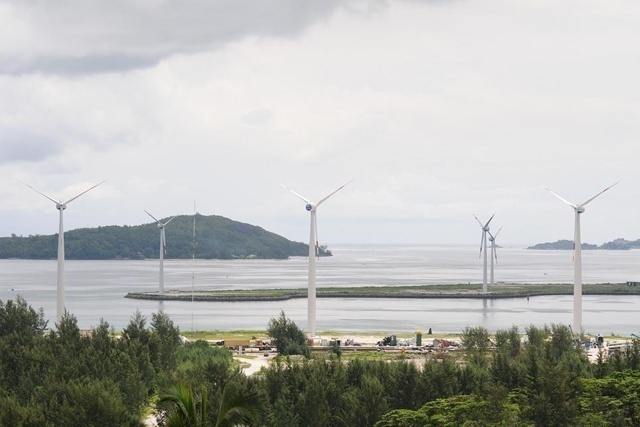 File photo: The Public Utilities Company (PUC) is responsible for the implementation of the project (Patrick Joubert)

(Seychelles News Agency) - Seychelles is expected to save over $1 million annually once the construction of a solar farm on Romainville Island, off the main island of Mahe, is completed later this year, said a top official.

The Public Utilities Company (PUC) – responsible for the implementation of the project - will install a five-megawatt solar photovoltaic system that will “produce around 7 million kilowatt hours of energy per year,” said Laurent Sam, the energy engineer at the company.

“This is equal to the consumption of an average of 2,000 households, should they be using 300 kilowatts of energy each month,” said Sam.

Sam added that “this will allow Seychelles to save 1.6 million litres of fuel that won’t be needed to use in PUC’s power station. If we are to calculate, based on the price of oil today, that will be a savings of around $1.02 million per year.”

“The solar farm will produce the equivalent of about 1.8 percent of our annual energy demand,” said Sam.

Seychelles – a group of 115 islands in the western Indian Ocean - relies heavily on imported fossil fuel for power generation and transportation. Currently, only 2.5 percent of the island nation's electrical energy is from renewable sources.

According to the company, once the plant is operational, the amount of renewable energy being produced in Seychelles will double.

Work has already started to clear the man-made island which already houses five wind turbines. The 14,850 installed solar panels are expected to cover half the perimeter of the island once work is completed in five to six months.

The project costs $10.2 million, a quarter of which will be financed by the utilities company. The government is financing the remaining three quarter through a loan, with an interest of two percent, obtained from the International Renewable Energy Agency (IRENA) and the Abu Dhabi Fund for Development (ADFD) fund.

The project will include the installation of a battery, which will play an important role by stabilizing the system. The battery, which is the size of four containers, will have a storage capacity of 3.3-megawatt hour with a power capacity of 5 megawatts.

In a previous interview with SNA the chief executive of the utilities company, Philippe Morin, said that “as the contribution of renewable energy increase in the network, there is always the risk of the power system becoming unstable.”

Morin gave a scenario to explain the need for a battery in the system.

“Let’s say we are getting a total of 10 megawatts of solar photo voltaic energy running perfectly with the PUC system, and then all of a sudden there is cloud coverage, and the production level drops to 2 megawatts. In this instance you have lost 8 megawatt which needs to be replaced in the system,” explained Morin.

The chief executive said that should the drop in production not be replaced the network will become unstable and that can lead to a blackout.

“To avoid this, you resort to storage. In the short term the most optimal in terms of the technical and economical solution is to use batteries,” said Morin.

The battery will not only be used in this project, as it will also be used to stabilize other renewable energy project that will come in the future.

In other developments in the solar energy sector, Seychelles is also planning to install Africa’s first utility-scale Floating Solar Photovoltaic (PV) system on the lagoon at Le Rocher, in the district of Les Mamelles.