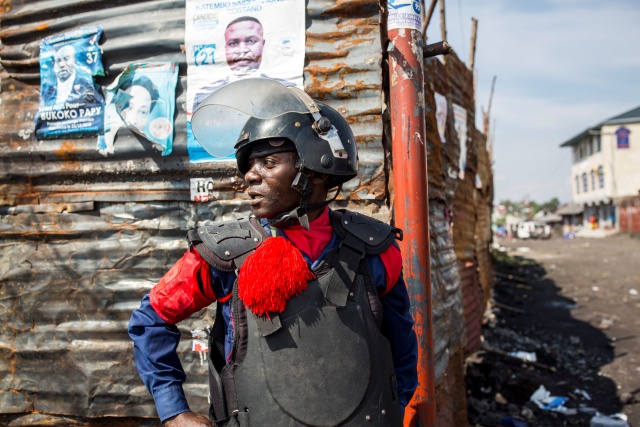 Police officers patrol Majengo neighborhood in Goma, on December 27, 2018, following a demonstration against the postponement, announced the day before by the Congolese national committee, of the general elections in this area because of the Ebola outbreak and the mass killings of civilians in this trouble part of DRC.
Already postponed three times, the elections are due to bring the curtain down on the era of President Joseph Kabila, in charge of the vast mineral-rich country for nearly 18 turbulent years. (PATRICK MEINHARDT / AFP)

(AFP) - The UN Security Council has postponed a key meeting on the elections in the Democratic Republic of Congo, at South Africa's request, after an announcement on the results was delayed, diplomats said.

The council was due to hold a public meeting Tuesday which is now expected to take place on Friday, according to council diplomats.

Last Friday, a closed-door council meeting was held at France's request, but world powers failed to agree on a press statement ahead of the release of the results.

South Africa, along with Russia and China, argued strongly in favor of holding off on any action until the results were announced, diplomats said.

The election commission in Kinshasa was due to release the results on Saturday but announced that there would be a delay until later this week, without specifying a date.

South Africa, a non-permanent council member, is a leading power in the Southern African Development Community (SADC) that includes the DR Congo.

South African Ambassador Jerry Matjila told reporters on Friday that the world must "be very, very patient" while vote-counting is under way and said his government would await an announcement from the election commission.

During the council meeting, France had pushed for "press elements" to be released on behalf of the council urging DR Congo authorities to respect the outcome of the vote amid fears of vote-rigging that would hand victory to the ruling party candidate.

Western powers hope sub-Saharan Africa's biggest country will see its first peaceful change of the presidency since independence in 1960.

President Joseph Kabila, in power since 2001, did not run in the elections but his ruling party has put forward former interior minister Emmanuel Ramazani Shadary as its candidate.

A total of 21 candidates are vying for the presidency including opposition leaders Martin Fayulu and Felix Tshisekedi.

A little over half of the ballots have been counted since the December 30 polls, according to DR Congo's election commission.