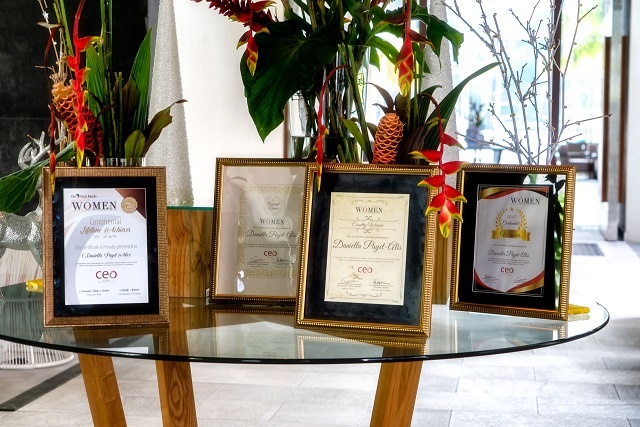 Daniella Payet-Alis walked away with a ‘Lifetime Achiever’ award, one out of 19 women to receive the title late last year under the Pan African’s Most Influential Women in Business and Government programme whereas Rosemary Elizabeth and Rosie Bistoquet walked away as country winners for the Welfare and Civil Society Organisation and Government Employment Official. (Daniella Payet-Allis)

(Seychelles News Agency) - Three Seychellois women have been recognized and awarded by CEO Global for the important role they have played in their particular field, pushing forward the development of society.

Rewarded under the Pan African’s Most Influential Women in Business and Government programme, Daniella Payet-Alis walked away with a ‘Lifetime Achiever’ award, one out of 19 women to receive the title late last year.

Rosemary Elizabeth and Rosie Bistoquet walked away as country winners for the Welfare and Civil Society Organisation and Government Employment Official.

The Most Influential Women in Business and Government programme is designed to uplift and recognise women across the African Continent. It provides a platform these women can use to celebrate their achievements, while paying tribute to women who are consistently exercising a positive influence on the continent.

Payet-Alis has been recognised as a lifetime achiever for her dedicated involvement in the tourism industry of Seychelles, an area she started working in at the age of 13.

“There is so much to share in this life, and there is so much still to be done. I am hoping that this award is just the beginning and that it canhelp inspire others and the next generation to connect, to share, and to exchange in the region,” said Payet-Alis.

On her part, Elizabeth has been involved for over 40 years in developing the civil society of Seychelles, working to empower women of the 115-island archipelago in the western Indian Ocean.

“Receiving the award goes to show that I am contributing quite a lot in the society especially when it comes to pushing women forward in life,” said Elizabeth.

She has founded five non-governmental organizations and has been involved with a dozen others - all focused on promoting gender equality and women empowerment. She attributed her most influential work to her involvement with two of those organization - the Alliance of Solidarity for the Family (ASSF) and the Women in Action and Solidarity Organization (WASO).

Bistoquet manages over 100 individuals as a director at the Ministry of Health. She is also the president of the Nurses Association of Seychelles (NARS), a position she took in 2016. During the years, Bistoquet has facilitated and chaired over 100 national multi-sectoral forums on health for different organisations nationally.

SNA was unable to reach Bistoquet to receive her reaction upon winning the award.

All winners of the Pan African’s Most Influential Women in Business and Government programme were nominated by people who have acknowledged these women’s contribution in their countries.

The three Seychellois women were also featured in the Regional 2018/2019 Edition of the Africa's Most Influential Women in Business and Government Magazine along with their peers from the continent.
General » Be a reporter: Write and send your article » Subscribe for news alert
Tags: CEO Global, Civil Society Organisation, Government Employment Official, Daniella Payet-Alis, Rosemary Elizabeth, Rosie Bistoquet, Seychelles Sustainable Tourism Foundation, Alliance of Solidarity for the Family, Women in Action and Solidarity Organization, Nurses Association of Seychelles