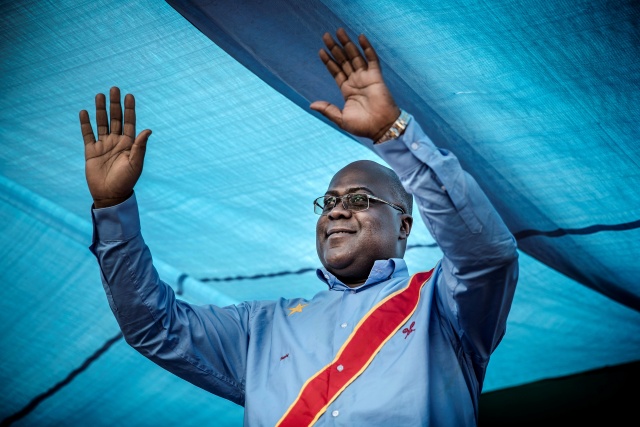 Democratic Republic of Congo's Union for Democracy and Social Progress (Union pour la Democratie et le Progres Social - UDPS) party leader and presidential candidate Felix Tshisekedi waves to the crowd during a campaign rally in Kinshasa, on December 21, 2018 in the courtyard of the party headquarter. DR Congo's troubled journey to elect a successor to the incumbent president hit a fresh snag on December 20, 2018 three days before voting, as electoral supervisors ordered a week-long postponement after a fire destroyed polling equipment. (Luis TATO / AFP)

(AFP) - Opposition candidate Felix Tshisekedi has won the long-awaited presidential poll in the Democratic Republic of Congo, the electoral commission said Thursday, paving the way for the country's first handover of power in 18 years.

"Having gained... 38.57 percent of the vote, Felix Tshisekedi is provisionally declared the elected president of the Democratic Republic of Congo," said Corneille Nangaa, the head of the Independent National Election Commission (CENI).

Shouts of joy erupted at the commission's offices as the historic results were announced.

The DRC has been in the grip of a two-year-old crisis over the succession of President Joseph Kabila, who said last year he would step down after nearly two decades in power.

The candidate he hand-picked to succeed him, loyalist, former interior minister Emmanuel Ramazani Shadary, came third in the poll.

According to the initial timetable set out by the CENI, the definitive results are due on January 15 with the swearing-in of the new president three days later.

The result could still be appealed in the Constitutional Court.