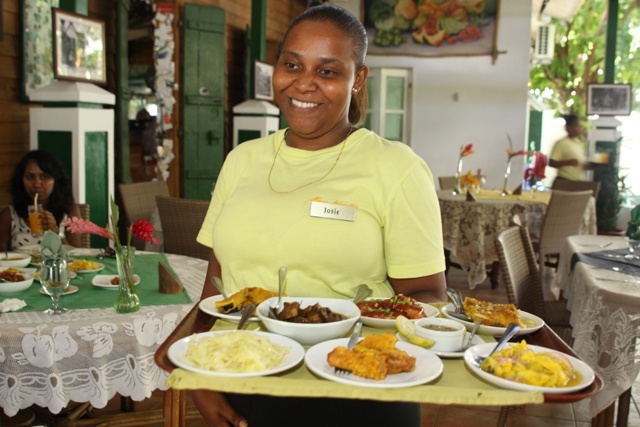 File Photo: Seychelloise waitress serving clients at the Marie-Antoinette Restaurant. The survey has shown disparity between the male and female group being unemployed

“The relief scheme has played a huge role in getting people into employment. We have conducted a door-to-door exercise disseminating information, which has been very effective in pushing people in employment,” explained the technical advisor of the employment department, Susan Morel, in a press conference on Wednesday.

From when it was reintroduced to the last quarter of 2018, around 1,900 people were able to find employment through the scheme.

The unemployment relief scheme which dates back to 1995 was reintroduced for unemployed Seychellois aged  18 years and above who were dependent on welfare.

Through the programme a person was able to earn the minimum wage of $408. Those who benefited from that scheme were offered a job and received training for it. The plan was devised to improve employment statistics and reduce dependence on the welfare system.

The quarterly figures are based on data collected in late 2018 through a national survey from a sample of 1,200 households split into sub-samples of 400 households. Interviews for the survey were conducted each month on all the main islands of Mahe, Praslin and La Digue.

Despite of the positive sign resulting in a drop in the unemployment rate the country still largely depends on foreign labour in order to fill in the gap in the market.

“A look of the statistic reveals that the number of foreign labour will continue to increase due to the country’s lack of labour force in certain sectors such as construction and tourism. This will remain unless we prepare ourselves to take the positions occupied by foreigners,” said Morel.

The technical advisor added that regardless of this, the country needs to review its policy in terms of recruitment to control excess influx of foreign labour.

According to the Seychelles National Bureau of Statistics there are currently 22,000 expatriate workers contributing to the country’s economy.

The Principal Statistician from the bureau, Maria Payet, explained that “the labour force of Seychelles comprises 49.3 percent males and 50.7 percent females. It consists of all persons who participates in the labour market, as either employed or unemployed.”

The youth unemployment situation vis-à-vis national unemployment in Seychelles for the last quarter of last year is in the ‘severe’ category, said Morel, adding that “this is due to the youth being lack of experience as they had just finished school.”

Talking on the informal sector Morel said that at least 16 percent of the employed population is going into this sector, but there is a disadvantage as often time these people are working in bad condition.

In the case of Seychelles – a group of 115 islands in western Indian Ocean, the informal sector is an enterprise or establishment (in the private sector) that is not legally registered with the Seychelles Revenue Commission or has obtained a license from the Seychelles Licensing Authority.

Seychelles ask US for assistance on corruption investigations, revenue collection