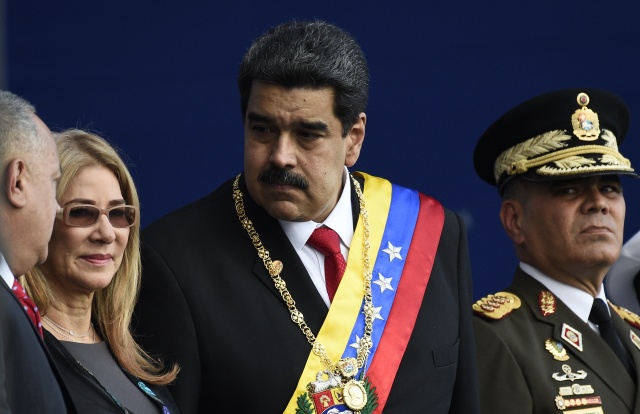 Venezuela's President Nicolas Maduro speaks with his number two Diosdado Cabello (L) next to First Lady Cilia Flores and Venezuela's Defence Minister General Vladimir Padrino (R) during the ceremony in which the Bolivarian National Armed Forces (FANB) recognize him after his inauguration for a second term, at the Fuerte Tiuna Military Complex, in Caracas on January 10, 2019. Maduro begins a new term that critics dismiss as illegitimate, with the economy in free fall and the country more isolated than ever. (Federico Parra / AFP)

(AFP) - Venezuelan President Nicolas Maduro began a new term on Thursday with the economy in ruins and his regime more isolated than ever as regional leaders declared his re-election illegitimate and shunned his inauguration.

The 56-year-old socialist leader was sworn in by Supreme Court president Maikel Moreno as an audience of hundreds, including a handful of South American leftist leaders and Venezuela's military top brass, cheered and applauded.

"I swear on behalf of the people of Venezuelan ... I swear on my life," Maduro said solemnly as he took the oath of office for a second six-year term.

After donning the presidential sash -- as well as a ceremonial gold chain bearing the key to the sarcophagus containing the remains of Venezuela's revolutionary leader Simon Bolivar -- an ebullient Maduro turned to salute the crowd with a V-sign.

Maduro was re-elected last May in voting boycotted by the majority of the opposition and dismissed as fraudulent by the United States, European Union and Organization of American States (OAS).

Canada slammed Maduro for transforming his country into a "fully entrenched dictatorship".

In a special session in Washington, the OAS similarly backed a resolution declaring Maduro's government illegitimate.

"Venezuela is the center of a world war with US imperialism and its satellite governments," the socialist leader retorted in a rambling speech which lasted around two hours.

He also demanded "respect" from the EU, accusing the bloc of "old colonialism" and "old racism" after it said Thursday that Maduro "lacked any credibility".

A smiling Maduro arrived at the court building serenaded by a choir singing patriotic songs. He blew kisses at a welcoming party of children waving Venezuelan flags, and saluted supporters looking down from the building's multi-tiered galleries.

With the exception of Mexico, the Lima Group -- made up of 14 mostly Latin American countries -- has urged Maduro to renounce his second term and deliver power to parliament.

Maduro used his speech to call for a summit of Latin American leaders to discuss "with an open agenda all the issues that need to be discussed, face to face!"

Lima Group member Paraguay announced immediately after the ceremony that it was breaking off diplomatic relations with Venezuela, while Peru branded it a "dictatorship."

A former bus driver and union leader, Maduro is the handpicked successor of the late leftist firebrand Hugo Chavez.

Maduro has gained control of virtually all of Venezuela's political institutions and enjoys the support of the military.

But his first term saw an exodus of millions of people escaping economic meltdown. The UN has said more than five million will have fled by the end of this year.

The International Monetary Fund predicts that Venezuela's economy will shrink by five percent next year, with inflation -- which reached 1.35 million percent in 2018 -- hitting a staggering 10 million percent.

Many blame Maduro for Venezuela's economic woes, which have left much of the population living in poverty with shortages of basic foods and medicines.

Thursday's ceremony took place in the Supreme Court rather than the sidelined, opposition-controlled parliament, which has refused to recognize Maduro.

Instead, in a statement Thursday the parliament called on the army, Maduro's bedrock, to formally disavow the president.

Maduro later took the salute from nearly 5,000 troops at a colorful parade at the military academy with his Defense Minister Vladimir Padrino.

He called on them to be prepared "for any circumstances that we face this year or in years to come."

While the opposition has tried to dislodge Maduro, it remains fractured, having launched a failed bid in March 2016 for a recall referendum aimed at removing Maduro from office before the end of his term.

Many prominent opposition figures are either in jail or exile.

Meanwhile the National Assembly, the one institution they control, has been left impotent after Maduro created the rival Constituent Assembly and filled the Supreme Court with loyalists who annul every decision made by parliament.

Maduro claims US and EU sanctions cost the country $20 billion in 2018. The opposition says the government's control of foreign exchange, in place since 2003, has generated $300 billion in illicit gains.

General » Be a reporter: Write and send your article » Subscribe for news alert
Tags: Venezuela, politics