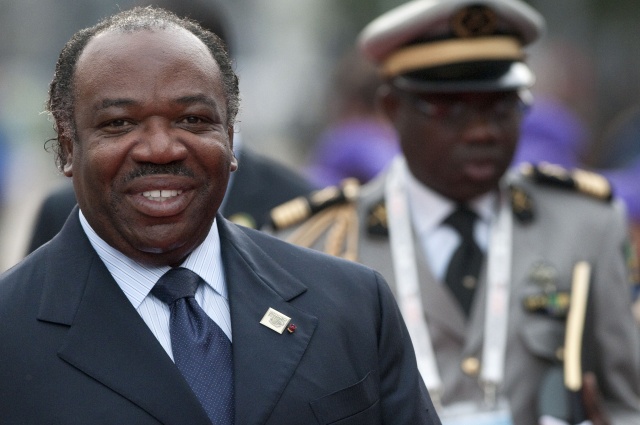 (FILES) In this file photo taken on October 23, 2010 Gabon's President Ali Bongo arrives at the congress center for the opening ceremony of the 13th Summit of Francophone countries attended by some 70 nations in Montreux. Gabon soldiers on state radio early January 7, 2019 called on the people to "rise up" and announced a "national restoration council" would be formed, as an ailing President is out of the country. Shots were heard in the around state television headquarters in the centre of the capital at about the same time as the message was read at 6:30 am. (SEBASTIEN BOZON / AFP)

(AFP) - Gabon's prime minister announced a new government in a video message recorded thousands of miles away in Morocco, where ailing Gabonese President Ali Bongo is recovering from a stroke.

Recently appointed PM Julien Nkoghe Bekale gave details of the reshuffle in footage broadcast late Saturday on state television, less than a week after the country foiled an attempted coup.

Gabon has been without effective government for months since Bongo suffered the stroke in October during a visit to Saudi Arabia.

A new cabinet was also announced on Saturday evening by presidential secretary Jean-Yves Teale in another video missive recorded in Morocco. No significant changes were made to either the cabinet or the government.

Gabon's constitution states that ministers must take their vows before the president -- but in Bongo's lengthening absence it is unclear how, when and where the ceremony will take place.

On Monday renegade soldiers stormed a state radio station to call for an uprising while Bongo was abroad.

Security forces captured the rebel chief and killed two of his men at the broadcasting offices in the capital Libreville, restoring calm to the city after hours of upheaval.

However questions remain over the balance of power in the West African nation where political change has been negligible for more than half a century.

Brice Laccruche Alihanga, head of the cabinet since 2017 who is reportedly close to first lady Sylvia Bongo, retained his post in the new line-up.

Ali Bongo, 59, is the son of Omar Bongo, who became head of state in 1967 and died in June 2009, leaving a legacy of corruption allegations.

Africa » Be a reporter: Write and send your article » Subscribe for news alert
Tags: Gabon, politics