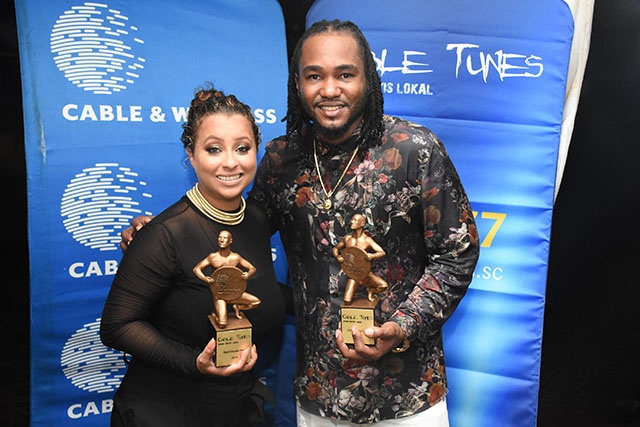 The awards ceremony, held at the Berjaya Hotel on the northern side of the main island of Mahe, was a glamorous affair. It dazzled guests with a colourful display of lights and lively performances by the winning artists and other Seychellois singers accompanied by the ‘Relations’ band.

After receiving her award, Esparon told the press that she is very proud of herself and what she has achieved throughout 2018.

“I thank all those people who have voted for me and the team who had worked with me on the album ‘Rekonesans’. The album has done pretty well and I am very happy,” said Esparon.

Esparon, 29, made her debut in 2005 with hit single "San ou (La Rivière)" as a member of Seychellois music band Dezil.

Her career has seen her release multiple albums and receive several awards both locally and internationally. In 2015, she won best artist of the Indian Ocean at the sixth edition of ’Les Voix de l'Océan Indien Award’.

Vincent Eliza, best known by his stage name Mercenary, is a singer with a number of local hit tracks. Mercenary ,who took up music professionally in 2006, grabbed the most trophies at the ceremony. On top of being named Seychelles' best male artist, Mercenary won other accolades such as winner for Best Album, Best Video Clips, and Best Seller.

“I am very happy to have won the award. It shows that people have appreciated my work and what I am doing in general as an artist,” said Mercenary.

Adding “a lot of people were saying that I will win the award, but I didn’t want to jump before my glass was full. Nevertheless, today I am here as the winner and I am very proud. “

More work will come from Mercenary in 2019? “Definitely yes. When you get encouragement of these sorts it pushes you to work harder and to come up with better tunes,” he said.

Being introduced for the first time in a music studio by well-known local artist Jahrimba to collaborate in a song that featured on the ‘Raggablastaz’ album, Mercenary then joined a group called ‘Fraka Crew’. He then did some collaborations with several artists and launched his first album along with Jakim called ‘Red Gold and Green Soldiers’.

Other Seychellois artists who were recognized during the gala evening included Auspicious, who won Best New Artist. The award for Best Collaboration went to Yhoni and Veronique for their song Kin Arive (What Happened)? The pair also won Best Duo.

Joseph Sinon a well-known entertainer in Seychelles – a group of 115 islands in western Indian Ocean – loved for his sense of humour won the Best Performer award.

The Cable Tune Awards is an annual event organized by Telecommunications Company Cable and Wireless.