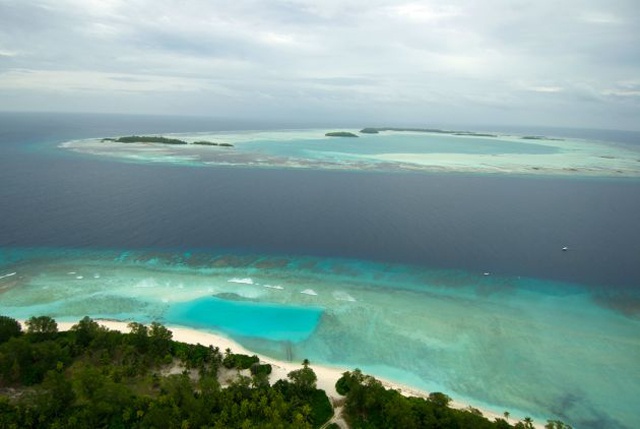 D’Arros Island and St Joseph Attol lie in the remote Western India Ocean about 250km form Mahe´ the most inhabited island in the Seychelles. They are divided by a narrow, 70m deep channel. (Save Our Seas Foundation, Rainer von Brandis ) Photo license: CC-BY 3.0

(Seychelles News Agency) - A tiny emerald in a sea of sapphire blue, the island group of D’Arros, situated in the outer islands of the Seychelles archipelago of 115 islands in the Indian Ocean, has been announced as an officially protected nature reserve under the Nature Parks and Conservancy Act.

According to a communiqué from the Seychelles environment and energy ministry issued on Thursday this week, the group of islands, which includes the privately-owned island of D’Arros and the St. Joseph atoll, situated only 2 km to the east, was officially made a nature reserve. This is in accordance to “the wishes of the owner of the D'Arros Island Group and conditions of the government sanction over the sale of the property.”

The ministry has announced that the entire St. Joseph atoll has become a special reserve in order to preserve its unique biodiversity, while a portion of D’Arros Island will be set aside for consideration as a RAMSAR Wetland Site.

“A ten year plan has been devised and implemented to reintroduce and rehabilitate endemic species in order to restore some of the original habitat,” reads the statement. “D'Arros Island, which is also rat free, will remain the main settlement in the atoll and host facilities for research and education.”

Named after Baron d'Arros, who was a French Marine Commandant stationed in Mauritius in the late 1700s, the island of D’Arros was since 1975 privately owned, first by an Iranian prince, Shahram Pahlavi Nia, and then by French billionaire Liliane Bettencourt, until it was re-sold in 2012 for an undisclosed amount and given over to the Swiss conservation lobby, Save Our Seas Foundation for marine conservation projects.

The purchaser of the island was the unidentified founder of the Save our Seas Foundation (SOSF), an anonymous figure whose identity has been kept a secret.

Until the sale, the island spent almost two years embroiled in a legal battle over ownership and taxes, marked by international media coverage of the legal woes of Bettencourt, who was battling a momentous tax evasion scandal in her native country, France.

In 2011 the heiress, who suffers from dementia, was ordered by a French court to hand over nearly $133 million in unpaid taxes after the revelation that she owned D’Arros and had undeclared accounts in Singapore and Switzerland. Her fortune was subsequently placed under the guardianship of her daughter Françoise Bettencourt-Meyers, who had to hand over $8 million in unpaid taxes to the Seychelles government from the sale of the island.

The islands, which have been under the management of SOSF in collaboration with the environment and energy ministry for the past two years, already boast of a wide range of conservation and education projects currently underway, including the implementation of a research programme approved by the government.

The reserve also covers an expanse of ocean extending one kilometre from D’Arros and St Joseph measured from the furthest reef edge at lowest astronomical tide.

In May this year, sixteen young Seychellois adventurers, known as the D’Arros Exploraters, who are members of the Save Our Seas Foundation’s “Lekol Zil Sesel” (SOSF Island School Seychelles), took part in the D’Arros Experience at the SOSF D’Arros Research Centre to learn about the unique ecosystems of the islands, and these expeditions will be organised twice a year in collaboration with the Ministry of Environment and Energy and the Ministry of Education.

In order to increase awareness of the environmental biodiversity of D’Arros, the ministry has said that exhibits will be organized in Victoria, for tourists and Seychellois alike.

Satisfied that another “jewel” has been added to Seychelles’ collection of conservation successes, Minister of Environment and Environment, Rolph Payet, has expressed the hope that the rewards will extend beyond the present generation.

“Our outer islands remain part of our unique biodiversity heritage and together with Aldabra will lay the ground for a network of protected areas within the outer islands of the Seychelles. Protected areas will also benefit Seychelles economically in terms of providing important refuge for fish and other marine life,” said Professor Payet.

“We are fortunate to be able to observe the life of several species close to our foundation. There are in particular many sharks, manta ray or turtles,” added Dr Michael Scholl, CEO of the Save our Seas Foundation.

“The extraordinary wild life of this unique piece of land, will also allow us to implement several research programs. There is also unique density of birds who are coming back to breed on the islands since we started to reintroduce its original vegetation. This will allow us to perform a detailed inventory of the flora and of the animals present of this exceptional natural site, not only for the Seychelles but also for the natural heritage of mankind.”